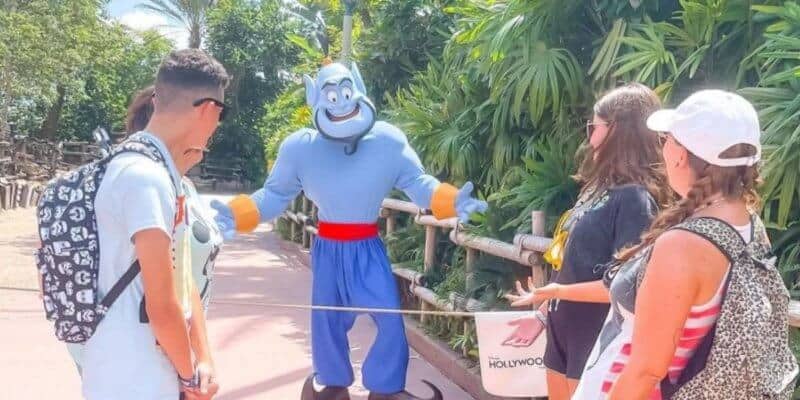 But it’s no lie that when a rare character makes an appearance, it’s an even more magical moment! I’m talking Robin Hood and Friar Tuck, some of the Disney villains, Clarabelle Cow, Horace Horsecollar, and even Pinocchio!

Well, we have some great news to share as a rare fan-favorite Disney character has made a surprise appearance at Disney’s Hollywood Studios — Genie from Disney’s Aladdin.

One Disney World Guest took to Instagram to share that Genie surprise theme park goers at Disney’s Hollywood Studios! Brynlie (@ourwonderfuldisneyworld) shared a photo of them chatting with Genie, at a safe social distance, writing:

When you accidentally block Genie from the photo. Sorry Genie.?‍♂️?

And another Disney World Guest, Laura R. (@lauramruth), also took to Instagram to share a selfie with the fan-favorite sidekick from Aladdin, writing:

I think it was kismet that we saw Genie! ? It was a hot and humid day at Hollywood Studios ? but so much fun with D.

Though seeing Genie is a rare sight, if you want to try and catch him, make sure to scope out Disney’s Hollywood Studios!

Other character appearances at Walt Disney World include Winnie the Pooh, who can be seen catching butterflies in the EPCOT grass, as well as Joy from Inside Out, who tends to frolic along the same grass. Over at Magic Kingdom, Guests can catch character cavalcades featuring Mickey and friends, Disney princesses, and more!

Have you ever spotted a rare Disney character at Disney World? Let us know in the comments below.

If you want to visit Walt Disney World on your next vacation, be sure to get in touch with our friends at Academy Travel, who will be with you every step of the way when planning your magical trip.