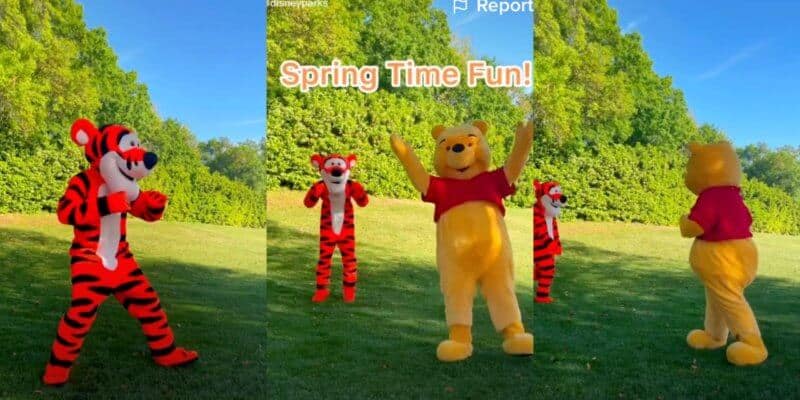 Everyone loves to see their favorite characters when they visit the Disney Parks, but due to the pandemic, in order to keep Guests and Cast Members safe, Disney World has decided to cut back and reimagine the character interactions.

Now, it seems that the Disney Parks TikTok account is bringing some of that magic to all of us at home! If you have ever been to EPCOT since the parks reopened, you likely know that some characters frolic around on the open patches of grass. We have seen both Winnie the Pooh, trying to catch butterflies, and Joy from Inside Out in the fields.

Today, we can that Winnie the Pooh has reunited with his best pal, Tigger, as they are playing an adorable hide-and-go-seek game. It’s safe to safe that Disney is welcoming in the warm spring temperatures that are filling Walt Disney World Resort at the moment, as you can see below!

Aside from this putting a big smile on any Disney fans face, the interesting thing here is that both Pooh and Tigger are seen playing together, which is something we have not seen for quite some time. Typically, as we mentioned above, it is either Pooh by himself catching butterflies or Joy from Inside Out who frolics along the grass and interacts with Guests from a distance.

That being said, when the characters are alone, it is definitely tough for them to be entertaining being so far away from the Guests. If Disney is starting to pair up characters in these distanced interactions, it would give Guests a unique experience, and bring back a sense of entertainment to the parks which has been lacking for quite some time.

However, considering that this interaction was shot for a video and not captured by a Guest, there is no guarantee that this is how Pooh will be showcased on your next visit to EPCOT, but keep your eyes peeled because Disney did confirm new character interactions would be coming in 2021.

It should be noted that meet and greets are currently not being offered due to the ongoing pandemic at Disney World or Disneyland, but, Disneyland Paris is getting ready to launch reserved meet and greets, which would work similarly to FastPass+. Although Disney has not noted if these new offerings will be coming to the Disney Parks within the U.S., it is a step in the right direction in terms of bringing back meet and greets. To read more about that, click here.

What kind of character interactions would you like to see more of when you visit Disney?

If you want to see Mickey Mouse or Minnie Mouse at Disney, you need to book your Disney vacation now. Click here to get started.