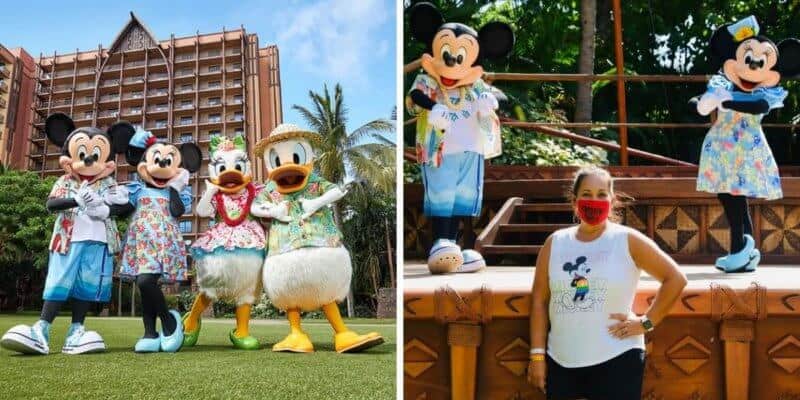 Just a few weeks ago, Aulani, a Disney Resort and Spa, reopened to Guests after being closed for several months due to the pandemic.

Like the other Disney Parks and Resorts that have already reopened to Guests around the world, Disney’s Aulani Resort reopened with safety as their number one priority, ensuring both Cast Members and Guests would remain healthy and safe when visiting the Hawaii Resort.

From increased physical distancing to face coverings to limited capacity, Disney’s Aulani Resort worked with the U.S. Centers for Disease Control and Prevention (CDC), as well as the U.S. Travel Association and Disney’s team of health and safety professionals to put several different safety protocols into place before reopening.

One other safety protocol Aulani implemented was the elimination of character meet and greets. Like the other Disney Parks around the world, Guests won’t be able to run up and hug some of their favorite Disney characters, however, Aulani confirmed some of our friends will be making socially distanced appearances.

And now, thanks to Disney Moms from Hawaii on Instagram, we are able to see how these characters will be saying hi to Guests visiting Aulani! In the video below, you can see Donald Duck and Stitch, dressed in their Hawaii attire, on the balconies as they dance and wave to Guests from a safe social distance.

A post shared by DISNEY MOMS FROM HAWAI’I? (@disneyhawaiimoms)

And thanks to Leticia, we can see how Mickey and Minnie are currently greeting Guests. She writes “No line for character meet photo ops?! One of the reasons I don’t do a lot of character photos is because I hate waiting in line ? I’m a total fast pass snob ?
This was the second day of the new photo ops at Aulani last week so not a lot of people knew about it, and I walked right up to say hello ??!”

@kountry1983 also posted a photo on Instagram as they met Mickey and Minnie in their Hawaii attire at Aulani, which you can see below.

If you are looking for more details surrounding Aulani’s phased reopening, check out our “Know Before You Go” guide here.

And if you are wanting to visit Disney’s Aulani Resort, but need help planning, don’t hesitate to reach out to our friends over at Academy Travel, who will be with you every step of the way when booking your magical Disney vacation. Get your free quote today!

Do you have plans to visit Disney’s Aulani Resort? Let us know in the comments below.

Comments Off on Disney Characters Spotted at Aulani Resort