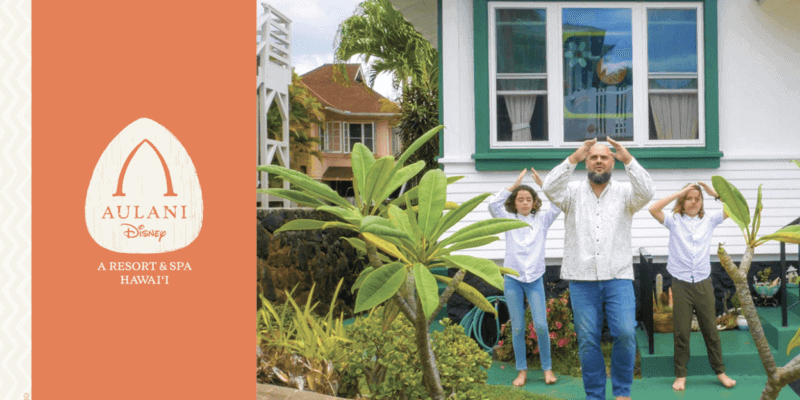 Aloha! The Disney Cast Members at Aulani Resort in Hawaii have sent a heartfelt message to all Disney fans in the gorgeous language of hula. Posted on the Disney Parks Blog as well as on the Disney Parks Youtube Channel, the #HulaFromHome video is serene, emotional and uplifting at the same time.

Traditionally, the Aulani, A Disney Resort & Spa, Cast shares the Aulani Hula with the Disney Vacation Club Members and Guests that visit the Resort. Through hula lessons at the Pau Hana Room and performances at KA WA‘A Lū‘au, it’s how they use traditions to bring people together. Distance is no obstacle here, as the Cast Members share the dance from home in many different styles and beautiful motions.

The Disney Parks Blog post shared a message from Aulani:

At Aulani, A Disney Resort & Spa, we love to share the Aulani Hula with our Disney Vacation Club Members and guests through lessons at Pau Hana Room and performances at KA WA‘A Lū‘au. It’s just one example of how our traditions bring us together. What’s special about the Aulani Hula is its simple elegance that enables the whole family — from keiki to kūpuna (children to seniors) to learn and dance together.

Aaron J. Salā, an award-winning singer, songwriter, and Hawaiian music professor composed the lyrics and music to the Aulani Hula. The dance, choreographed by Kumu Hula Kaleo Trinidad, coupled with the song, helps us all share in the mo‘olelo (story) of a stay at Aulani Resort.

Today, I am honored to share this compilation of Aulani cast members and their ‘ohana (family) at home beautifully showcasing how the Aulani Hula can continue to bring us all together.

More #DisneyCastLife stories have been shared by the blog, like the #voicesfromhome from the Dapper Dans’ rendition of  “When You Wish Upon a Star.” The heart touching melody combined with the classic tones of the Dans makes this homebound edition of the song extremely emotional.

Another Cast Member voices her safari script from home while engaging all her stuffed animals from Disney’s Animal Kingdom and a remote control safari jeep. It’s an extremely creative way to keep sharing your craft while homebound!

Lastly, while you’re waiting for another magical story from the Cast Members you love, here’s a great list of ways to get your Disney fix from home. From puzzles to Park snacks, we’ve got the perfect way to pass the time in this post.

Comments Off on #HulaFromHome: Aulani Resort Cast Members Share From The Heart