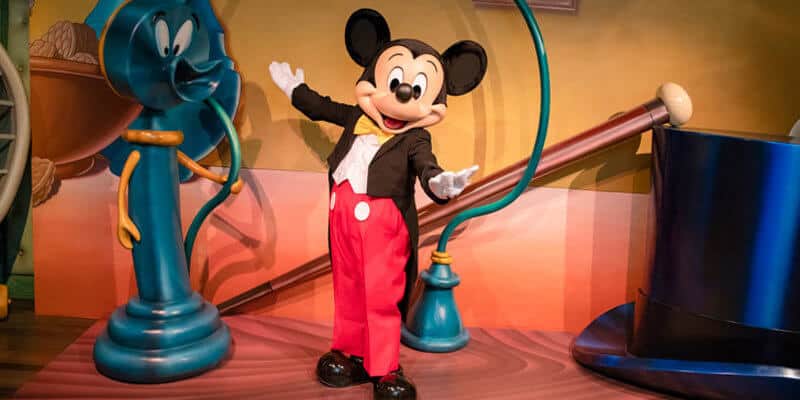 Due to the ongoing COVID-19 pandemic, there have been many changes at the Disney parks, especially in Disney World! One of the biggest things that Guests are missing is character meet and greets.

At the moment, Guests are able to have character interactions from a distance, or, experience characters on cavalcade as they parade around the parks daily. For example, each day at Magic Kingdom, you can catch a variety of characters waving at the top of the Walt Disney World Railroad train station at the tip of Main Street U.S.A. but you must interact with them for a distance.

You may be in EPCOT when all the Disney princesses like Ariel, Belle, Jasmine, Snow White, Cinderella, enjoy a ride through EPCOT’s World Showcase in a horse and carriage and wave to you as they go by. It is definitely still magical, but now Disney has created a new system to meet characters.

Disneyland also has characters interacting with Guests from afar at their A Touch of Disney event. We noticed Joy from Pixar’s Inside Out and even Max and Goofy fishing while we visited the event.

Although these character interactions are still very magical, Disney parks worldwide seem to be a few steps ahead when it comes to bringing back meet and greets. As we can see in the below DLP Report (@DLPReport) Tweet, Disneyland Paris is getting ready to have Guests book meet and greets through the Disneyland Paris official app when the Hotel New York – The Art of Marvel opens.

An update to the Disneyland Paris official app reveals that Guests at the upcoming Hotel New York – The Art of Marvel will be able to open their room door with their phone!
They’ll also be able to book a meet and greet at the “Super Hero Station” in the hotel.

? An update to the Disneyland Paris official app reveals that Guests at the upcoming Hotel New York – The Art of Marvel will be able to open their room door with their phone!
They’ll also be able to book a meet and greet at the “Super Hero Station” in the hotel: pic.twitter.com/zFJHtVCg6e

Tokyo Disneyland is already doing something similar with their app where Guests can submit an “Entry Request” on the Tokyo Disney Resort app to have a character meet and greet.

Considering having a scheduled meet and greets is something that multiple Disney parks are testing, it would be interesting to see if those types of meet and greets were brought to America at Walt Disney World and Disneyland. Guests could still keep a six-foot distance from the character, as they do with Anna and Elsa when they pop out in the Norway pavilion, but this will allow for a more personalized and unique experience, and the opportunity to snag some great selfies!

It would almost be like a FastPass+ option, however, there would be no regular line. It likely would be an incredibly popular offering if Disney were to do something like this in their American parks but would be a huge draw for many Guests. Disney World previously offered Guests the ability to book a meet and greet through FastPass+, however, they could bring back bookable character meet and greets as a separate option — with a six-foot distance still between Guests and characters — much like we are seeing at the international parks.

It would also add back an offering that has been removed for quite some time now, which will only help create a desire to return for Guests, as meeting characters is the highlight for many on their Disney vacation. Plus, this will remove the worst part about meet and greets which are the terribly long waits, since everything would be scheduled on the Disneyland app or My Disney Experience.

Although this has not been confirmed, hopefully, the progress at other Disney parks overseas is good news for what is to come!

Would you want Disney World and Disneyland to bring back meet and greets if you schedule them?