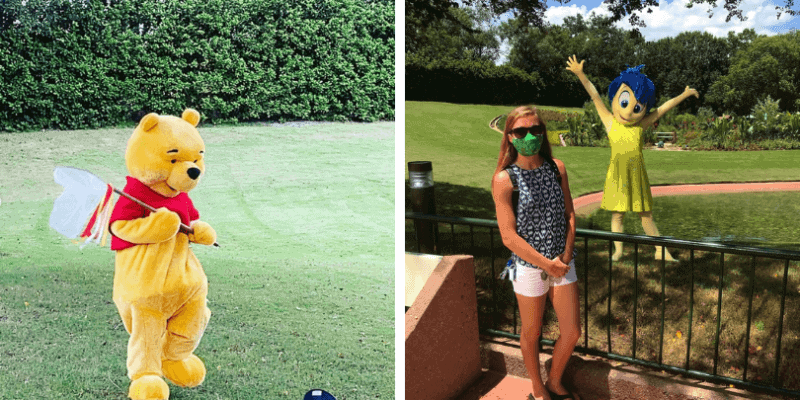 We’re now halfway to opening up all the Walt Disney World theme parks in Orlando, Florida.  Magic Kingdom and Disney’s Animal Kingdom opened up July 11 with Cast Member and Annual Passholder preview days throughout the week.  Yesterday and today, Cast Members are able to do preview days at Disney’s Hollywood Studios and EPCOT before they open to the general public tomorrow, July 15.

There are still Cast Members and Characters who are hard at work making magic inside the parks!

Characters are Hard at Work too!

Characters working hard too?  Yes, we all may not be able to be near them right now, but they’re still out and about doing work around the parks.  Well, Winnie the Pooh may not be working so much as he is catching butterflies, or is he supposed to be gardening?  Joy from Inside Out is frolicking through the EPCOT fields and using all her energy to bring a cheerful environment to Cast Members and Guests alike!

Cast Members who got to enjoy EPCOT during Preview Day snapped some photos of these charismatic Characters greeting them from afar.

We’ve seen the periodic cavalcades of characters and waves from the Railroad Station at Magic Kingdom, as well as, characters cruising around on a boat at Disney’s Animal Kingdom.  We’ve also seen examples of how character meet and greets will work at DHS!

Comments Off on Disney Characters Out and About at EPCOT