Could Disney Start Using Robots for Character Meet and Greets? - Inside the Magic 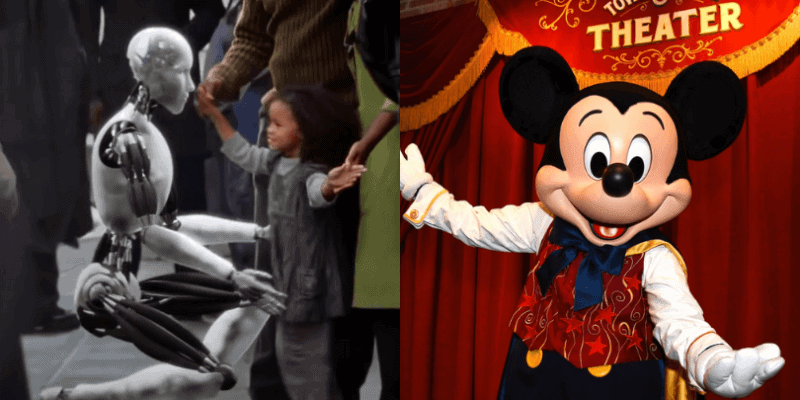 While the rest of America was starting to gather together for Thanksgiving and thinking about the hefty meal to come, Disney was hard at work submitting patents set to improve multiple levels of the magical immersive experience Guests feel in the parks.

One of the patents immediately caught our eye.

Disney filed a patent for a new “robot actor”:

A robot actor, or character mobility hardware platform, adapted to unleash or provide a wide variety of characters in the physical world. The robot actor enables the often screen-constrained characters to become life-like, interactive participants with nearby people in ways not presently achievable. The robot actor is an untethered, free-roaming robot that is has two (or more) legs, is adapted for high dexterity, is controlled and designed to be self-balancing, and, due to this combination of characteristics, the robot can provide characters with an illusion of life and, in many cases, in correct proportion and scale. The hardware and software of the robot actor will become a new generation of animatronic figures by providing a hardware platform capable of continuously evolving to become more capable through advances in controls and artificial intelligence (AI)

Here is a diagram of what it will look like:

Related: New Ride Patent Could Be For ‘Guardians of the Galaxy’ Coaster

While it is very possible that it could be just a new form of animatronic as the abstract says, this reporter suspects something different. Especially after reading the first patent claim which states that this invention is:

Could this technology be used to bring more characters to life in the parks? And considering the ongoing pandemic situation, could Disney be going so far as to build their own robotic characters for character meet and greets?

Character meet and greets are still suspended at Walt Disney World Resort due to safety concerns of spreading the virus from character to Guest or vice versa. A robotic “actor” dressed as a character would eliminate that risk, leaving sanitation the only mild concern from Guests touching the characters. The character attendants would then be able to monitor and control the robotic character from a safe distance.

While the technology needed to replace what are called “face characters” like the Disney Princesses is not there yet — although it is getting close — the “fur characters” like Mickey and Minnie appear to be well within the realm of possibility with this new Imagineering creation.

Other Disney Parks have gone to other lengths to bring back a modified meet and greet with human Cast Members, but this would be the first time robots are incorporated.

Related: How Disney World Could Bring Back Character Meet and Greets

At this point, I need to clarify that this is purely speculation. There has been absolutely no word from anyone at Disney on this matter. However, the idea of any “fur character’ being played by some super-advanced interactive robot does get the imagination going down the rabbit hole (with Alice and the Mad Hatter).

We at Inside the Magic will keep our ear to the ground and update our readers as more information on this comes to light.

What do you think this new robot patent is for? Let us know in the comments!