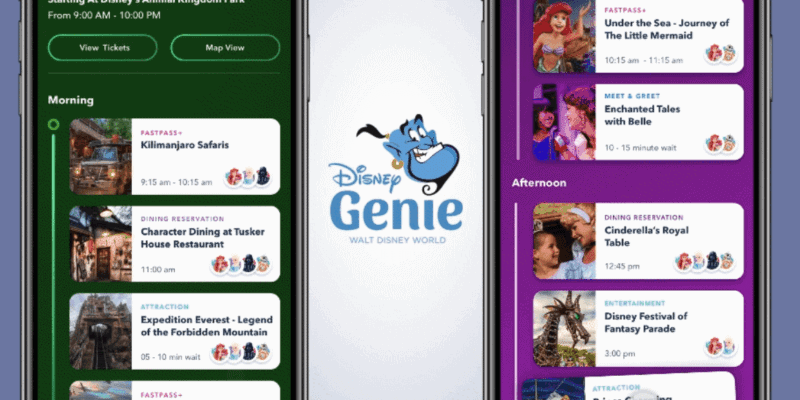 At the D23 Expo in 2019, Disney made several announcements surrounding what Guests can expect to see for the 50th anniversary in 2021 — Including an all-new planning digital experience called Disney Genie.

Though, since the big announcement almost two years ago, we have yet to hear anything definitive regarding this “revolutionary new digital offering”. Disney did promise it would debut for the 50th anniversary celebration, which we recently found out will begin on October 1, 2021 and last for a total of 18 months and all four theme parks!

So, with this being said — plus with Disney World recently retiring free MagicBands — could we see the Disney Genie finally debut?

More on The Disney Genie

In case you aren’t familiar with what the upcoming Disney Genie is — Back in 2019, Disney Parks Blog described Disney Genie as:

You ain’t never had a friend like this! Moments ago, at D23 Expo 2019, details were unveiled by Disney Parks, Experiences and Products Chairman Bob Chapek for “Disney Genie,” a revolutionary new digital offering set to debut in late 2020 that will enhance the way you plan for and experience a trip to Walt Disney World Resort. Joining other innovations like the MagicBand, Disney Genie is being designed to help you make the most out of your visit, whether you’re a first-time guest or a seasoned pro.

Disney Genie will make planning easier and more fun by providing customized itineraries geared to your interests, right at your fingertips – from a royal, princess-themed day at Magic Kingdom Park to a trip around the world at Epcot for foodies and even a perfect day for thrill seekers. Certain features of Disney Genie will also be available through your preferred travel professional.

Sometimes you may know exactly what you want to do, but may not know the best time or order in which to do it. You’ll be able to tell Disney Genie what you’d like to experience, and it will quickly evaluate millions of options to present you with an optimal day. And best of all, it’s flexible! If you change your mind for any reason, Disney Genie will re-optimize your day.

Disney Genie can also send you real-time tips and updates, including recommendations for experiences it thinks you’ll love, helping you navigate the theme parks with added convenience and comfort. If you don’t want to worry about making reservations in multiple steps, Disney Genie will even take care of that for you.

This represents yet another way we are using creativity and innovation to connect guests with the stories and characters they love, and to help them make lasting, magical memories with the family and friends they cherish most. Over the past several years, Disney parks have become more seamless and enjoyable through other digital offerings, such as mobile food ordering, the Play Disney Parks app, online check-in and so much more.

Even though Disney World discontinued the free MagicBands, they are still selling new ones for reasonable prices. Additionally, you can opt to use a Key To The World card (provided at the Front Desk of your hotel) for Disney Resort hotel room entry, theme park entry at any of the four Disney Parks — Magic Kingdom, EPCOT, Disney’s Hollywood Studios, and Disney’s Animal Kingdom — and charging purchases to your hotel room with a valid credit card. Or, Guests can opt to use a MagicBand from a past visit.

But, with the discontinuation of free MagicBands, is Disney gearing up to finally debut the Disney Genie? Disney has explained that this new digital offering “is being designed to help you make the most out of your visit, whether you’re a first-time guest or a seasoned pro”. Though this wouldn’t necessarily be a replacement for MagicBands, it could be Disney’s way of continuing to move forward with new offerings and up-to-date technology.

It wasn’t long ago that Walt Disney World finally announced additional details surrounding the upcoming 50th anniversary celebration. October 1, 2021 will mark 50 years since Magic Kingdom at the Most Magical Place on Earth opened its gates and that is exactly when the Walt Disney World theme parks — Including Magic Kingdom, EPCOT, Disney’s Animal Kingdom and Disney’s Hollywood Studios — will be kicking off their 50th anniversary celebrations (which, again, will last for a total of 18 months!)

As stated previously, at the D23 Expo in 2019, when Disney World announced the new Disney Genie app, it was explained that this new digital offering would be available for Guests in time for the 50th anniversary — So now that we finally have details surrounding this milestone celebration, could it finally be time to learn more about this app?

Even though at the time of publication, Disney has not yet announced additional information surrounding the Disney Genie, including a debut date, we here at Inside the Magic hope to get details soon as we are quickly approaching the 50th anniversary celebration.

Are you excited for when Disney debuts the Disney Genie? Let us know in the comments below.