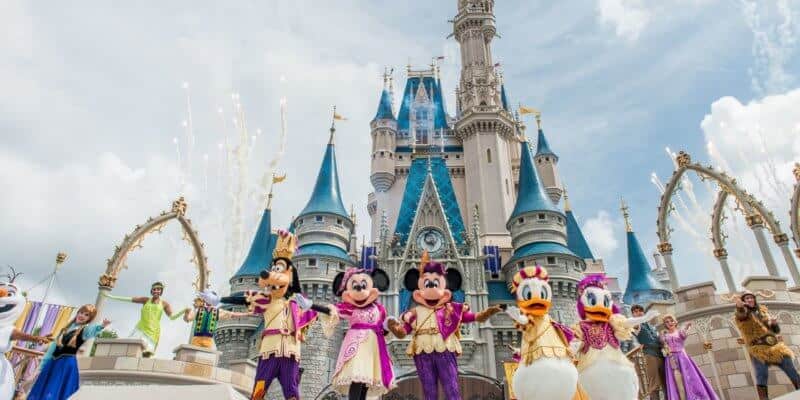 Walt Disney World is known for its “above and beyond” mentality as well as its unique entertainment offerings. From fireworks to parades to iconic stage shows, Disney World is filled with one-of-a-kind offerings perfect for all ages.

One of the most popular entertainment shows is Mickey’s Royal Friendship Faire — which used to take place daily in front of Cinderella Castle at Magic Kingdom prior to the current pandemic. But with Disney World’s 50th anniversary just around the corner, have we seen the last of this stage show?

First, let’s dive into what exactly Mickey’s Royal Friendship Faire is. In case you never got to see this Cinderella Castle stage show, the official description reads:

You can watch a full video of a performance from 2016 on our YouTube channel here:

Could a Replacement Show Be On Its Way?

This Cinderella Castle stage show has been at the theme park since 2016, and with this big milestone of the Disney World 50th just around the corner, it could be a great time for Disney World to debut a brand-new stage show. Not only will this coincide with the 50th anniversary special events, but it will draw in even more Guests who may have already seen Mickey’s Royal Friendship Faire but will want to see an all-new performance featuring new stories, costumes, and themes for the 50th anniversary of Magic Kingdom and Walt Disney World Resort.

Personally, I would love to see Disney World bring a brand new stage show to the theme park specifically for the 50th anniversary celebration! Since the celebrations will last for 18 months, it could be the perfect opportunity to bring something new to the table for a lengthy amount of time.

Please keep in mind this article is pure speculation and Disney World has not announced the closing of Mickey’s Royal Friendship Faire or a replacement show at this time.

Disney Parks Blog shared more details on what Guests can expect at the Disney Parks for the upcoming 50th anniversary celebration:

If you want to visit Walt Disney World Resort for the upcoming 50th anniversary celebrations, but aren’t sure where to begin planning — Get in touch with our friends over at Academy Travel. Not only will they help you book your Resort, purchase theme park tickets, or reserve Park Pass reservations, they will also give insight on what are the must-do’s specifically for your family! Start planning your Walt Disney World Resort vacation today.