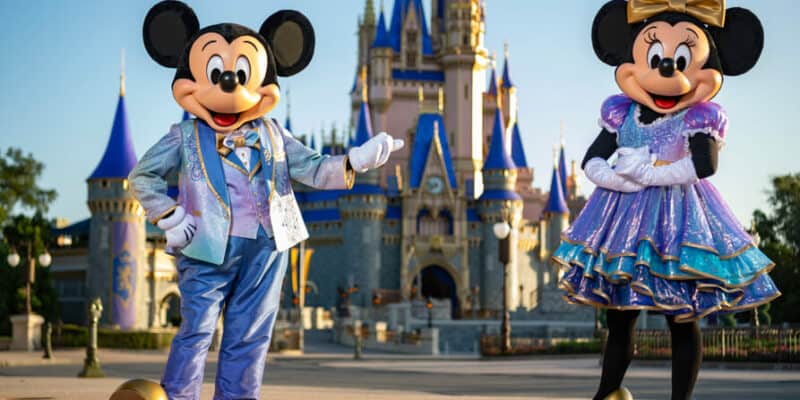 On October 1, 2021, Disney World will commence their biggest celebration yet. “The World’s Most Magical Celebration,” is being held for 18 months to celebrate 50 years of magic, and today, we were just given a sneak peek at what magic to expect during the festivities.

So far, not too much has been announced, but here is a recap of what has been said up until now.

As we previously mentioned, we now have confirmation that the festivities will commence on October 1, and will last 18 months — which means Guests can visit the Most Magical Place on Earth and celebrate until 2023. Considering we are going through uncertain times when travel is difficult for many, the length of the celebration will allow Guests to visit when they feel safe, and not rush the experience.

We also got to take a look at Mickey and Minnie’s new costumes! The purple and blue iridescent fabric shines bright with accents of gold highlighting the fits.

Also, we discovered that not only will Cinderella Castle be decorated, but so will Spaceship Earth at EPCOT, the Tree of Life at Disney’s Animal Kingdom, and Tower of Terror at Disney’s Hollywood Studios. Excitingly, we have learned that the lighting package that will debut on Spaceship Earth will last past the 50th anniversary celebrations.

With all that being said, of course, Disney fans have started sharing their reactions and thoughts about the 50th anniversary. S0 let’s take a look at a few!

Mickey and Minnie always have the best costumes when it comes to any Disney celebration! This year, the fan-favorite couple will shimmer their way into 50 years at Walt Disney World!

Disney Parks Blog said this about the outfits:

Fans seemed to have slightly mixed reviews on the outfits, however.

On our Facebook post, Tiffany shared, “Being that it is the golden anniversary, I really was hoping to see a lot of gold.”

This opinion has also been popping up all over Twitter. Although the outfits have hints of gold, it seems that many Disney fans were expecting gold as the main color in the 5oth anniversary color palette.

That being said there are also fans like Erica who simply stated, “I love it!!”

I love the official Mickey and Minnie Mouse costumes for the 50th Anniversary of Walt Disney world. #disneyworld50

I love the official Mickey and Minnie Mouse costumes for the 50th Anniversary of Walt Disney world. #disneyworld50 pic.twitter.com/QJ0QZ2hC2z

In terms of what Guests are saying about the 50th anniversary celebrations as a whole, it seems there is a lot of excitement in the air, mixed with lots of questions.

On Facebook Shelly said, “Now if only Florida passholder will open back up.”

As some may not know, Walt Disney World Resort is not currently selling new Annual Passes. Only existing Annual Passholders can renew their passes, but a newcomer is currently not allowed to purchase a new Annual Pass. There are many Guests such as Shelly — and especially Florida residents — who would like to attend the celebration over a multitude of days, but financially, purchasing multiple-day tickets could cost quite a bit.

Disney has not yet announced when new Disney World Annual Passes will return for Guests to purchase, but we will keep you updated when more information is available.

Gino noted, “If only I can get a reservation for that day. I’m booked for a resort but, can’t get into MK because it’s all booked up.”

As of now, Disney World is currently operating at 35% capacity and all Disney Park Pass reservations are full for Magic Kingdom. Unless capacity increases, Guests should look to other days if they want to celebrate.

Regarding pandemic protocol, Sallie asked a question that is on the minds of many, “Are they getting rid of mask mandate by then?”

Disney already announced that masks are likely going to head into 2022 at the Disney parks. Of course, the state of the world — including vaccination distributions — will be the deciding factor as to when Disney removes their mask mandate, but for now, it is in place and has the power to remove Guests who do not comply.

All of that being said, most Guests are very excited about the celebrations! On Facebook, Tracy said, “can’t wait!

Could not be more excited for ✨ Walt Disney World’s 50th Anniversary! ✨

Could not be more excited for ✨ Walt Disney World’s 50th Anniversary! ✨ pic.twitter.com/MVZRkChl6v

18 months of Magic!! Can’t wait. I’ll be there on Oct 1 and posting on social media. ?? The World’s Most Magical Celebration’ Begins Oct. 1 at Walt Disney World Resort | Disney Parks Blog

What are your thoughts about “The World’s Most Magical Celebration”? Will you be attending?