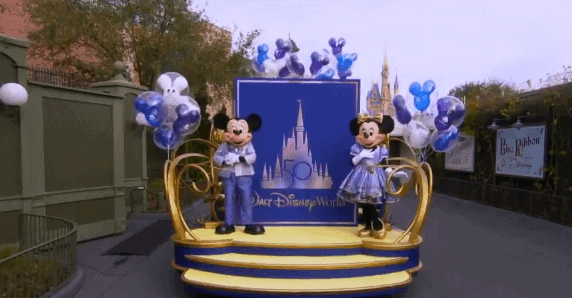 Disney World is turning 50, and Mickey and Minnie are celebrating! We now have a special look at the all-new costumes that Mickey Mouse and Minnie Mouse (our favorite Disney couple) will debut for the 50th anniversary celebrations at Walt Disney World Resort.

We shared last night a sneak peek of the announcement Disney would be making this morning on Good Morning America. In that sneak peek, Disney previewed the new costumes for Mickey and Minnie, including Cinderella Castle embellishments and sparkling fabric in beautiful jewel tones.

But now, thanks to Disney Parks Blog and Good Morning America, we have an even better look at the costumes that Mickey and Minnie will wear to celebrate the 50th anniversary of the Most Magical Place on Earth, Disney World. It’s clear that these Disney Park characters are getting excited to celebrate the theme park that makes dreams come true.

As you can see in the image below, these costumes are incredible. They remind us of the color scheme used for the latest parade to debut at Disneyland Resort, Magic Happens. Of course, since this is the golden anniversary, there are touches of gold, just like on Cinderella Castle. Simply magical!

Good Morning America also shared the following video, and the very end shows a glimpse of Mickey Mouse and Minnie Mouse with Cinderella Castle shining brightly in the background.

SNEAK PEEK: @WaltDisneyWorld is celebrating 50 magical years and to mark the occasion, @Disney cast members are putting together “The Most Magical Celebration on Earth.”#DisneyWorld50@Ginger_Zeehttps://t.co/GDQpinQyVp pic.twitter.com/P9MWj5HexN

And, of course, Walt Disney World shared another look at Mickey and Minnie on Instagram:

As we mentioned in our coverage, the 50th anniversary celebrations of Walt Disney World — “The World’s Most Magical Celebration,” as described on GMA — will last a full year and a half and begin on October 1. Want to book a trip? Our friends at Academy Travel have you covered — click here to make your dreams come true!

We expect Disney to share more details about what’s coming soon to Walt Disney World Resort in Orlando, Florida. But for now, we’re getting excited that this celebration will last a very long time, giving everyone a chance to experience the magic.

What do you think of Mickey and Minnie’s new outfits for the 50th anniversary of Walt Disney World? Let us know in the comments!

Comments Off on Mickey and Minnie Debut NEW LOOKS For WDW 50th!