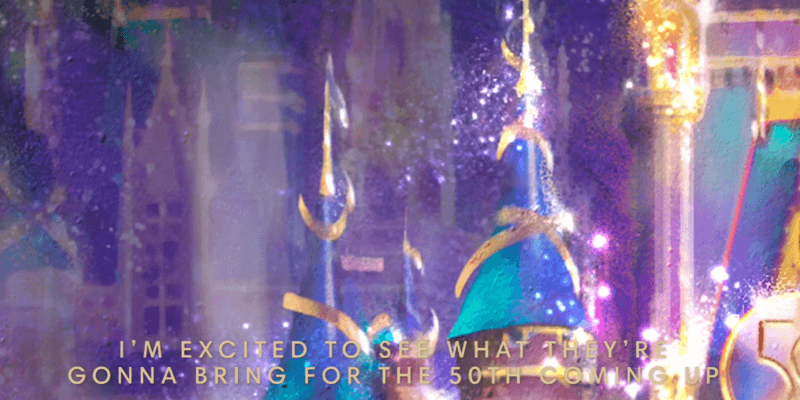 The Walt Disney World Resort in Central Florida is gearing up for its 50th anniversary! Disney has just teased what announcements they have in store for fans for the resort’s 50th anniversary celebrations. Are you excited?

Related: CHEAPEST Days to Go to Disney World Next Year!

Here is what Disney had to say on their Twitter, along with a video:

Tune in Friday morning to @GMAand the Disney Parks Blog as we share a glimpse of the @WaltDisneyWorld Resort 50th Anniversary celebration. #DisneyWorld50

Tune in Friday morning to @GMA and the Disney Parks Blog as we share a glimpse of the @WaltDisneyWorld Resort 50th Anniversary celebration. ✨? #DisneyWorld50 pic.twitter.com/KJYUujLOwJ

There were some standout quotes from the video:

“To me, celebration is literally Walt Disney World”

“I’m excited to see what they going to bring for the 50th coming up.”

“…Bringing together people from all around the world.”

“50 years since Walt Disney World opened, we’re still going with the ideal that Walt wanted people to be with family, and to celebrate each other.”

“A celebration looks like to me sharing the memories that you’ll have for a lifetime with the people you love the most.”

You can see in this screenshot from the trailer that the deep royal colors of purple and blue will be a theme throughout the celebration. Not only on the castle, and Magic Kingdom entrance, but also on the special celebratory outfits worn by Mickey Mouse and Minnie Mouse!

The entire trailer is bathed in this royal purple light, and we absolutely love it! Could we see royal purple Minnie Ears and Magic Bands? Fingers crossed!

While the official day of the 50th anniversary of Disney World is October 1, the celebration is believed to go on for at least a year, just as we experienced with the 60th anniversary celebration of Disneyland Resort six years ago. We are hoping to get confirmation of the dates of the celebration tomorrow on Good Morning America, though what exactly will be announced is not yet revealed. Currently, Disney Park Pass reservations for Magic Kingdom are filling up for October 1, the exact date of the 50th anniversary, but if you want to book a trip, click here!

Will you be going to Walt Disney World for the 50th anniversary celebration? Let us know in the comments!