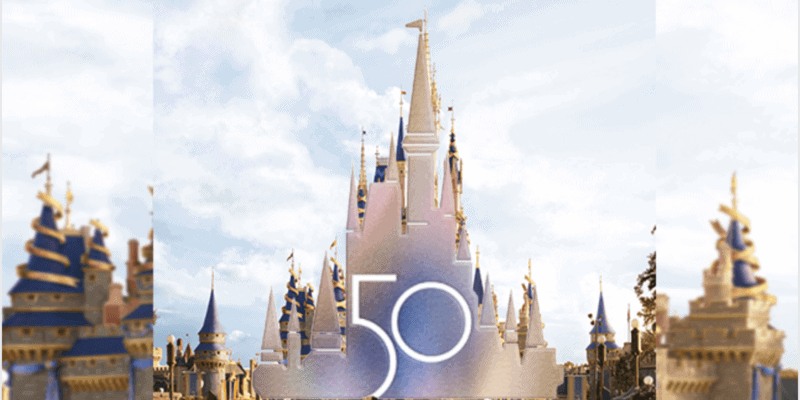 The event will begin on October 1, 2021 — Magic Kingdom’s official 50th birthday — and will run for 18 months. This is great news for those who don’t plan to visit Walt Disney World Resort again until 2022, after COVID-19 vaccine distribution has become more widespread.

As part of this morning’s announcement, Disney confirmed that Cinderella Castle, the centerpiece of Magic Kingdom Park, will be getting even more magical ahead of The Most Magical Celebration on Earth!

Last year, in honor of Walt Disney’s Cinderella (1950) celebrating 70 years, the castle received a royal makeover. It now features a rose gold, royal blue, and gold color scheme. In addition to the Cinderella Castle makeover, the Magic Kingdom toll plaza and all of the Walt Disney World entrances have received aesthetic updates!

Join us for “The World’s Most Magical Celebration,” beginning Oct. 1, 2021, in honor of the 50th Anniversary of @WaltDisneyWorld Resort. ✨? Find out more: https://t.co/7p6rd5kHTr #DisneyWorld50 pic.twitter.com/LcvEdLXOJL

Now, additional embellishments will be added to give Cinderella Castle an even more dazzling appearance. Disney Parks Blog shared:

The castle will add even more magic at night, joined by icons at each of the other three theme parks as they transform into Beacons of Magic. In the video above, you can get a feel for what they’ll look like, with pixie dust on Cinderella Castle…

It looks like the castle is going to be even more magical than ever before, especially at night! We can’t wait to see this Disney World icon’s continued transformation. You can take a look at the daytime version of the castle below, all decked out for the Disney World 50th.

Cinderella Castle welcomes you to a magical world where dreams come true. The 189-foot landmark boasts lofty spires and ornate turrets and is the gateway to Fantasyland.