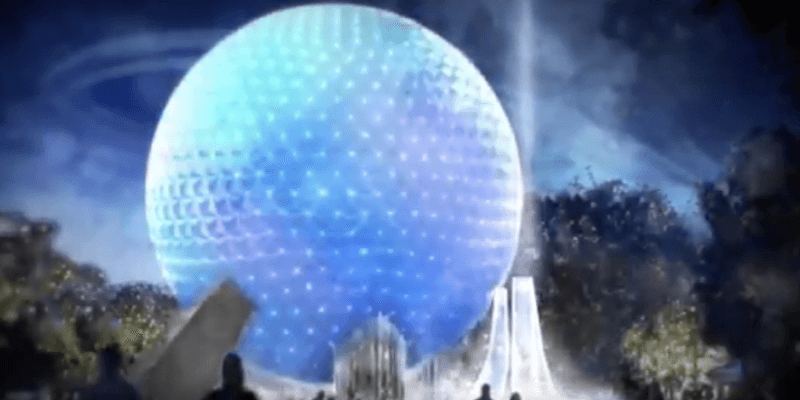 As  “The World’s Most Magical Celebration” quickly approaches the Walt Disney World Resort in Orlando, Florida, many Guests have been patiently awaiting the news on what the Disney Parks are going to do to celebrate the 50th anniversary. Now, we finally have our first glimpse into what to expect — and some of the decor is going to last a lot longer than the celebrations will.

Beginning October 1, 2021, and running for 18 months, Walt Disney World will be hosting the celebrations for the 50th anniversary! If we take a look back to the 25th anniversary, many can remember that Cinderella Castle at Magic Kingdom was transformed into a giant pink birthday cake — a discussion topic that often divides Disney fans — so fans were eager to see what was to come for the 50th in terms of Cinderella Castle.

Lucky for us, the 50th anniversary celebrations will be bringing something special to all of the main centerpieces at each Disney park — and EPCOT’s new lighting design will be sticking around for good.

As we previously reported, during the 2019 D23 Expo, Bob Chapek and Zach Riddley announced several big projects coming to EPCOT — including new lighting that was going to shine all over Spaceship Earth.

According to Imagineer Zach Riddley, a new and enhanced lighting package will soon be installed on the exterior of Spaceship Earth, EPCOT’s icon.

“And speaking of night, to complement the design of world celebration out ream are beginning work on an enhanced lighting package coming to the exterior of Spaceship Earth that will activate this area of the park like never before. This lighting design will allow us to create custom programming that connects this icon of EPCOT to its surroundings and perfectly encapsulates the park’s transformation. Again, taking this symbol of optimism and hope and collaboration across culture and time and really creating a unique evening moment that again will make EPCOT such a defining feature at night.”

Now we have confirmation that the new lighting at Spaceship Earth will be permanent. Here’s what Disney Parks Blog shared:

EPCOT’s Spaceship Earth is already lit up beautifully at night. To know that it is going to be enhanced for not only the anniversary but for longer than that will serve as a reminder of the 50th anniversary celebrations and will continue to allow Guests to be in awe of the stunning Spaceship Earth.

What do you think of EPCOT’s new Spaceship Earth lighting design?

If you want to be at the 50th Anniversary Celebrations, you need to get booking today to ensure you arrive on time in Orlando! You can visit Magic Kingdom, Animal Kingdom, Disney’s Hollywood Studios, and EPCOT to celebrate with Mickey Mouse in Orlando. Disney Park Pass reservations are selling fast, so click here to get started!