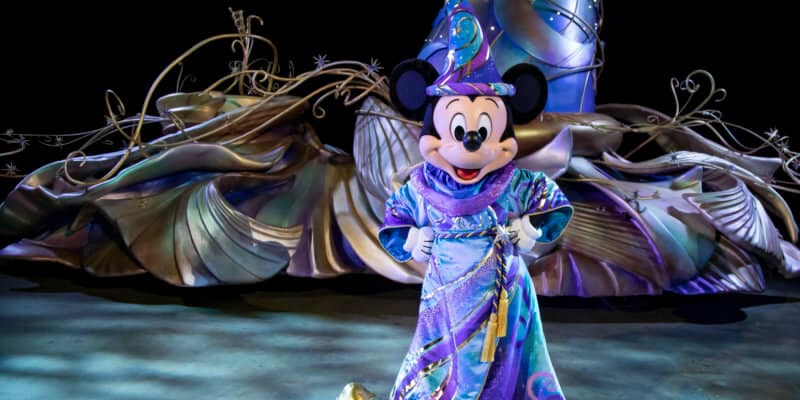 Disneyland is getting a new parade: Magic Happens! And trust us when we say that it’s nothing short of magical. Inside the Magic just attended a preview of the all-new Magic Happens parade — which debuts at Disneyland on February 28 — and here’s why you should get excited for this amazing new offering at the Happiest Place on Earth.

Magic Happens is Disneyland park’s first new daytime parade in almost a decade. And while we were sad to see the fantastic Soundsational parade leave our happy place, we’re welcoming Magic Happens with open arms. This new parade features the new Disney characters we know and love and classic Disney stories that we hold forever in our hearts. It reminds us of three important things to live by that Disney stands for every day: wings aren’t needed to fly, shooting stars were created for wishes, and magic doesn’t end at midnight.

“Disneyland park opened with a parade, right? So I think a parade adds a really magical touch to the day,” said David Duffy, creative director at Disney Live Entertainment. “It’s a chance for our families and all of our guests to experience a multitude of Disney characters and a multitude of Disney stories. Families can take a moment, they can sit down on one of the curbs Main Street or Small World, take a break, and we just bring the magic to them. So I think it really is a wonderful addition to the day.”

Take a look at some of the concept art for the parade:

But why now — why is early 2020 the best time for Disneyland park to debut a new daytime parade?

“Right out the gate, there are so many new stories to tell,” said Jordan Peterson, show director at Disney Live Entertainment. “This is the first chance that we’ve had to tell those tales — Moana and Coco — and at the same time go back and tell those tales that are so important to us, from Sword and the Stone, from Sleeping Beauty as well. Knowing your past helps you build to your future, and that’s a great example of what we’ve done in this parade”

“When we first went down this path a little over two years ago, we knew we were going to have Star Wars: Galaxy’s Edge, which was, of course, going to be amazing as it is. And we all knew that we were going to have Avengers Campus even though that hadn’t been announced yet,” said Duffy. “So we thought, what a perfect opportunity in this spring, right between those two, to come back with a message about our core Disney equity, our core Disney storytelling. So we’re really taking advantage of all the amazing intellectual property and stories that we have the opportunity to tell here at the resort.”

Something that really stands out to us about this parade is the music. The soundtrack is absolutely phenomenal, from what we can tell so far. It was co-composed with singer-songwriter (and ultimate Disney fan) Todrick Hall and is a mix of an original song called “Magic Happens” with the soundtracks of our favorite Disney films. So far we can tell that the original song plus the Coco and Frozen 2 portions of the parade loop sound fantastic, and we can’t wait to hear the entire musical score in person when the full parade debuts this month.

“The music — it’s so good. When I say that we go home and that we listen to the soundtrack in the car, it’s not because I’m doing research…it’s because I’m having so much fun with the music. And I can tell you from day one that every time a track would drop I would be like “Oh my gosh please AirDrop it to me!” And I would pretend like it’s for business purposes — It’s not. It’s so that I could go home and jam out to it,” said Peterson. “Truly, it’s the balance that Todrick and that team was able to — and the Disney team was able to — achieve between listenable, ‘I just want to put it on on my drive to work’ kind of music, as well as being as whimsical and grand and magical as it can get to deserve to be on the streets of Disneyland.”

We also learned that Mickey Mouse and so many other Disney characters are getting a whole new look for this parade! Of course, everyone loves the classic Disney characters, but the beautiful costumes in Magic Happens are inventive and tell stories that we thought we could only dream about. Cinderella and Sleeping Beauty, for example, are wearing costumes that portray such magical moments in their fairy tale stories, such as the moment when Cinderella’s rags transform into a beautiful ballgown and the end scene of Sleeping Beauty when Flora and Merryweather turn Aurora’s dress from pink to blue and back again.

“I really love Mickey and the VIP characters,” said Duffy. “I love that we have really played with their costumes in a way that I haven’t really seen us do at our domestic parks or on the cruise ships or other places I’ve been. We’ve really taken them to a very abstract, very whimsical look. You know oftentimes, we’ve kind of taken human clothes and find a way to interpret those. Well, these are really abstract things that only mice and chipmunks and whatever Goofy is would wear.”

The performers in this parade are called “magic makers,” and their costumes (as well as Mickey’s!) are nothing short of magical. Take a look at this sneak peek of some of the photos from a backstage rehearsal, including Mickey Mouse’s reinvented sorcerer’s costume and the magic makers in their whimsical yet contemporary outfits:

Book a trip to the Disney Parks to see Magic Happens!

Want to visit Disneyland in time to watch the Magic Happens parade for yourself? You won’t want to miss it! The Authorized Disney Vacation Planners at Academy Travel can make your Disney dreams come true and book your vacation so you can focus on enjoying all the magic of Disneyland. Magic Happens makes its debut at Disneyland Resort on February 28 and will be running twice daily after that. Click here to book a Disneyland trip with Academy Travel and see Magic Happens in person!

Are you excited for Disneyland’s new Magic Happens parade debuting later this month? Which Disney Park to you hope gets a new parade next? Let us know in the comments!