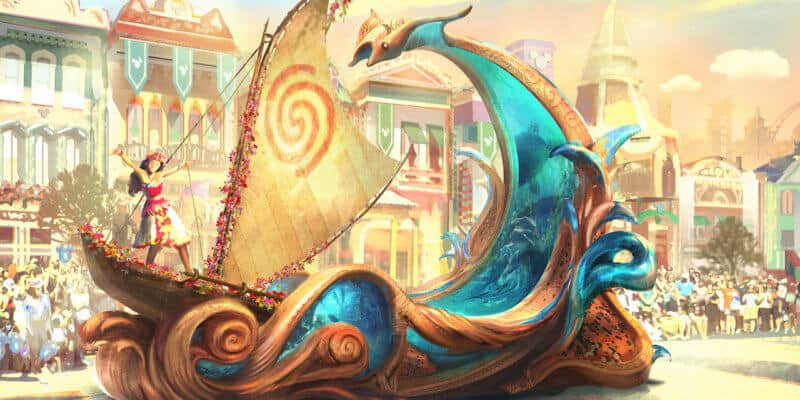 An all-new parade is coming next year to Disneyland Resort, and we couldn’t be more thrilled! While we’re sad to see Soundsational leave Disneyland park, we’re definitely excited for a breath of fresh air to be hitting the streets of the southern California theme park. The new parade is called Magic Happens — and now we finally know when it’s going to debut!

Magic Happens will debut at Disneyland park on February 28, 2020, so mark your calendars! The parade stars Moana, Maui, Elsa, Anna, Miguel from Coco,  the fairies from  Sleeping Beauty, and so many more characters we know and love!

Take a look at some of the concept art for the new Magic Happens parade:

Here’s how Disney describes the new parade coming on February 28 to Disneyland park:

“Magic Happens” celebrates awe-inspiring moments of magic that are at the heart of so many Disney stories. Mickey Mouse leads this new daytime spectacular down Main Street, U.S.A., revealing a parade of stunning floats, beautiful costumes and beloved Disney characters. “Magic Happens” will also feature an energetic musical score and a new song, co-composed by singer-songwriter Todrick Hall…“Magic Happens” will remind us we don’t need wings to fly, that shooting stars were made to wish upon, and that magic doesn’t stop at midnight.

After reading Disney’s announcement about Magic Happens — and after getting a sneak peek of the music from the new parade at D23 Expo in Anaheim over the summer — we can’t wait for the parade to premiere.

If you’re just as excited for Magic Happens as we are, why not book a trip to Disneyland Resort to celebrate? Now that we know when the new parade will debut, there’s nothing stopping you from booking the Disneyland vacation of your dreams. The Authorized Disney Vacation Planners at Academy Travel can make all your Disney dreams come true. Whether you want to visit on February 28 to be among the first to see Magic Happens on Main Street, U.S.A., or whether you want to book a trip for later in the spring, there’s no wrong time to visit the Happiest Place on Earth. Click here for a free, no-obligation vacation quote from Academy Travel!

What do you think of the Magic Happens parade coming soon to Disneyland? Which character are you most excited to see? Let us know in the comments!