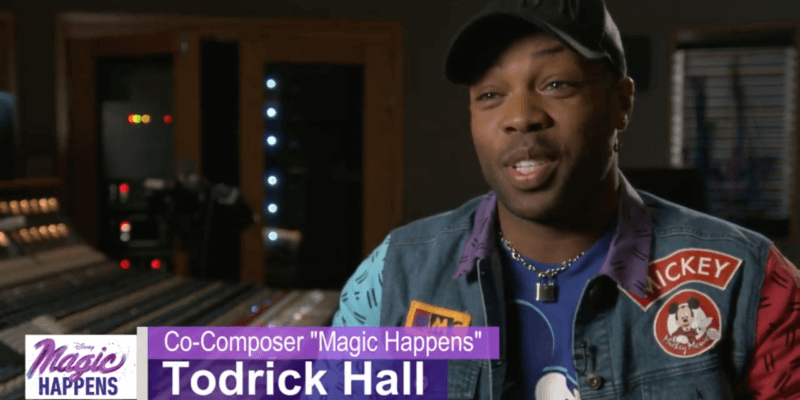 Have you ever watched a Disney parade or fireworks show and wondered who writes these songs?

Well, when you watch the new “Magic Happens” parade at Disneyland next year, you can tell your friends that the songs were co-composed by singer-songwriter Todrick Hall.

“This is such a full-circle moment for me,” he said. “I learned to dance watching the Disney parades. So, the fact that I get to create the music that these iconic characters are going to be performing to, it’s kind of the most epic thing that’s ever happened to me in my life.”

Hall praised the creative team, not only in their cooperation with him but in the designs of the floats and costumes they created. “In my mind,” he recalled, “before I even left the room after our first meeting, I knew exactly what my task was: to bring this story and this message to life.”

Hall also touched on the diversity that will be represented in this parade. From Moana and Coco to Sleeping Beauty, he said the parade is a “perfect reflection” of what’s happening not just in Disney films but in the nation and the world as a whole. He said, “I think that people of all ages, and ethnicities, and backgrounds are going to see someone in this parade that looks like them and that makes me happy.”

Disneyland’s new “Magic Happens” Parade will feature beloved characters and songs from several of Walt Disney Animation Studios’ films from Frozen 2 to Sleeping Beauty and several in between. It will also be led by Mickey Mouse and all his pals. The “Magic Happens” Parade is set to debut at Disneyland Park in Anaheim California on February 28, 2020.

Are you thinking of planning a trip to The Happiest Place on Earth? Our friends at Academy Travel are here to help. Backed with years of experience and award-winning planning and service, the agents at Academy Travel are standing by, ready to help you make this Disneyland trip the most magical one yet. Click here to get in touch and get a free no-obligation quote.

Are you excited for this new Disneyland Parade? Do you think it will be better than “Paint the Night” or any other past parade? Let us know in the comments!