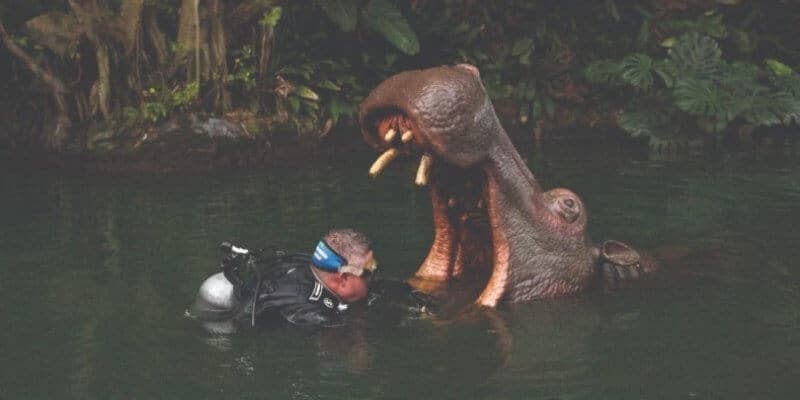 Have you ever been on the Jungle Cruise at Disneyland, looked over the side of your boat into the muddy water below and thought, “What the heck’s down there?”
Well, there’s a lot. A lot of mechanics, a lot of junk, and occasionally a few divers.
Thomas Self is one of those divers. One of 70 cast members chosen to be featured on the Disney+ original docuseries and coffee table book, One Day at Disney, Self was the subject of a recent feature in the OC Register and shed some light on the dark world beneath Disneys waters.
“There’s not really a booklet for it,” Self said. “A lot of that is simply learned by getting in the water with the old timers as they’re doing it. Then we continue to pass it on.” But since we can’t all get in the water, we happily take his word for it.
Their work involves a lot from salvaging to mechanical inspections. Disneyland divers work on every water ride in the Magic Kingdom. That includes:
Self explained the Submarine Voyage was every diver’s favorite. “It’s like a big, giant swimming pool, he said. “So we can see everything.” Every other ride, especially Jungle Cruise, offers almost zero visibility.
“It’s just braille,” he explained. “You feel around. You know this is a sensor, this is a wheel, this is a chain. A lot of the work is reaching inside or through or under something. You can’t see it, so you just have to know what you’re doing, where your hands are and where your partner’s hands are. You learn by doing.”

“There’s not really a booklet for it,” Self said. “A lot of that is simply learned by getting in the water with the old timers as they’re doing it. Then we continue to pass it on.”

Disneyland Divers are very much jacks-of-all-trades, on-hand to perform any task required to take place u underwater. They inspect the propulsion system on it’s a small world. They ensure the hippos and elephants come up and down when they’re supposed to. And they work with Disneyland’s entertainment and decor team by performing tasks such as repairing the boats and fixing the launch systems in the water.
“A big part of it is a lot of the show elements and making sure that the hippos come up when they’re supposed to and the elephants do their thing,” Self said.
Obviously, there are times when repairs have to be made out of the water. But, these in-water maintenance runs offer quicker turnaround time and therefore an increase in guest satisfaction. The divers work these jobs in full SCUBA diving equipment (wetsuit, mask, air-tank, and respirator, etc.) and they work in teams. Multi-dive jobs require teamwork and lots of preparation.
“We count on each other,” Self said. “We know who’s where. We look out for each other.”
Technical background as well as Open Water Diver, Advanced Diver, and Rescue Diver certifications are required for this job.

Salvaging is one of the more annoying aspects of the job. “Debris is the biggest issue,” Self said. “Occasionally the odd branch finds its way into the water and can get hung up in a track that could cause a problem.” Most of that debris comes from the guests.
Self and others while diving have found smartphones, wallets, purses, shoes, and even engagement rings. Turkey legs are also found discarded from attractions such as the Mark Twain Riverboat. Perhaps we can be more careful with how we handle our stuff in the parks.
One funny story self shared was when he had to do a salvage dive in search of a relic of Mara, the goddess from neighboring Indiana Jones and the Temple of the Forbidden Eye. The figure of Mara’s head came loose from the river bank after some heavy rains.
Once he found it, Self surfaced lifting Mara up first. “It scared the daylights out of everybody on the dock,” he said.
Disneyland diver Thomas Self began his Disneyland career working as a cook at the Plaza Inn on Main Street U.S.A. while he was in college. After serving in the Navy as a machinist aboard the USS Abraham Lincoln, Self returned to Disneyland to be a diver, a.k.a. a “wet machinist.” His work helped launch Disney California Adventure, Hong Kong Disneyland, World of Color, and most recently Star Wars: Galaxy’s Edge.
“As a Navy brat, I never was far from the water growing up,” he said. “Water has always been a part of everything.” Little did he probably know that he would be recording that dive time on Disneyland property.
Self also starred in a short Disney video “Every Role is a Starring Role” back in 2011. You can watch the video and learn more about what it takes to be a Disney Diver here:

Comments Off on VIDEO: Look at the Life of a Disneyland Diver, Finding Jewelry at Jungle Cruise