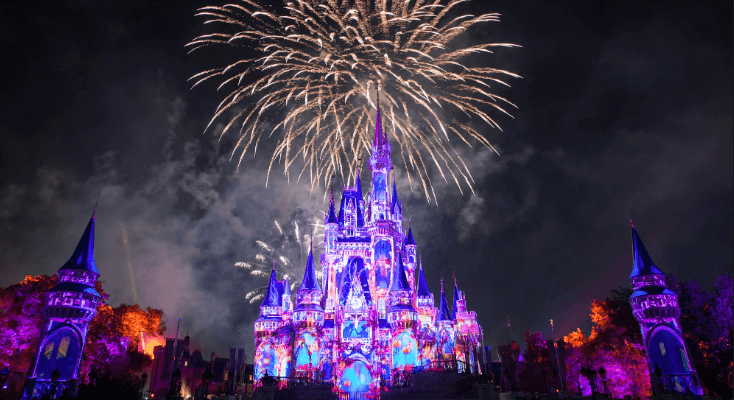 We are coming up on Walt Disney’s 50th anniversary in just a few short months, and we now have a lot more information about “The World’s Most Magical Celebration”. That being said, nothing says celebration like fireworks!

Now that we are approaching a year of no nighttime celebrations at Magic Kingdom due to the current pandemic, Disney fans who are missing Happily Ever After may be wondering if the show would return for the 50th.

Based on what Disney has released for the 50th anniversary celebrations, speculations can be made about not only the return of fireworks, but also, a possible projection show!

Let’s start with the idea that Disney can air a pre-show projection show on the castle. When thinking of Happily Ever After, Guests may be used to the projection show going alongside the fireworks, but Disney has done solo projection shows before, specifically at Magic Kingdom.

If we think about Wishes, you may remember that prior to the fireworks was a projection show that lit up Cinderella Castle.

Most recently, Once Upon A Time would be the projection show that Guests could watch before leaving the Magic Kingdom. Though currently unavailable due to the pandemic, Disney still lists this show on their website, which is described:

Join your animated hosts Mrs. Potts and her son Chip for a captivating bedtime story that recounts cherished moments from tales that begin with the classic line, “Once Upon A Time.”

With dazzling special effects and soaring music, the show sweeps you away to far-off lands—as scenes from Cinderella, Peter Pan, Frozen, Alice in Wonderland and Beauty and the Beast are projected onto the iconic palace. Enjoy your very own happily ever after—every night!

If we take a look at the concept art for the 50th anniversary celebrations, it does look like there are projections happening on the castle. In order to commemorate the anniversary, a new projection show would be a perfect special addition to Magic Kingdom’s nighttime spectaculars.

That being said, as we mentioned earlier, there are currently no fireworks or evening shows happening at any Disney World park at the moment due to COVID-19. This is in order to prevent the crowds that would gather if a show took place.

However, it does seem that Disney expects to bring back nighttime spectaculars, not only based on the above concept art (whose swirling glittery specs are oddly reminiscent of a firework burst during Happily Ever After), but also with Disney recently confirming the new nighttime show, HarmonioUS, will debut in 2021.

Additionally, Mickey and Minnie’s brand new 50th anniversary costumes could be giving us a hint!

Our favorite mice will be decked out in EARidescence digs, that actually have fireworks embroidered all over when you take a closer look.

If we check out Mickey Mouse’s jacket, we can see that there is a firework design on his shoulder. He also has the castle embroidered on the suit with fireworks going off behind it. Although this does not mean fireworks will return, it could be foreshadowing the possibility.

Minnie Mouse also has the same firework design on her chest. It does seem that there is a theme going on when it comes to fireworks and the 50th anniversary designs.

For now, Disney has not mentioned if Guests should expect to see a firework show or projection show at Magic Kingdom, and this is all purely speculation at this point. That being said, the 50th anniversary will last for 18 months, and if the state of the world improves before, or during that timeline, Disney would not have social distancing as a concern when it comes to rebooting Happily Ever After, and potentially, adding in an extra special pre-show.

Again, HarmonioUS at EPCOT, is set to debut in 2021. World Showcase does allow for a lot more distancing when watching a show around the lagoon, so there is a chance that HarmonioUS may be the only nighttime show to come to Disney World in 2021.

Stay tuned to Inside the Magic as we continue to bring you all the latest news regarding the Walt Disney World Resort’s 50th anniversary celebrations!

Do you think Disney will have a firework show at Magic Kingdom?

If you want to be at the 50th Anniversary Celebrations, start booking your Orlando vacation today! You can visit Magic Kingdom, Animal Kingdom, Disney’s Hollywood Studios, and EPCOT to celebrate with Mickey Mouse. With Disney Park Pass reservations selling fast there has never been a better time to book — click here to get started!