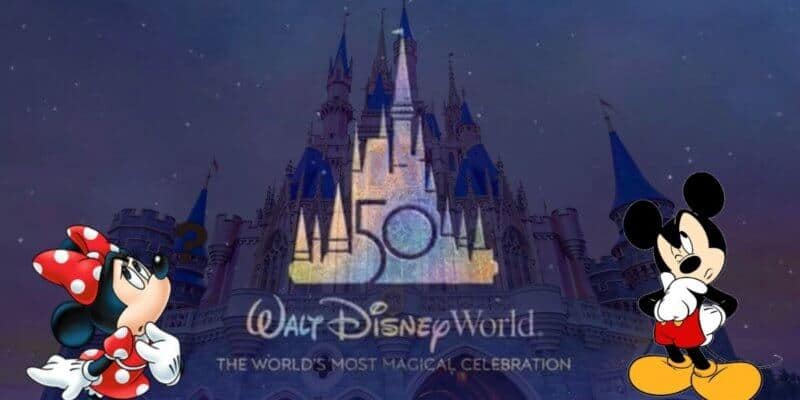 On October 1, 1971, Walt Disney World, The Most Magical Place on Earth, opened to the public, and before we knew it, it became one of the most popular vacation destinations around the world. Now here we are, almost 50 years later!

Disney World fans everywhere have been eager to celebrate the Resort’s 50th Anniversary this year, though, at this time, not many details have been released surrounding what the theme park property’s plan for this milestone celebration.

Other than this small bit of information Vahle revealed, we really don’t know much about what the Resort has planned, despite it being only a few months away. So, with that being said, could Disney World be waiting to see how the current state of the world changes by then? Could finances be impacting what Disney World has planned? Will they hold off on celebrating the 50th and wait until The Walt Disney Company’s 100th Anniversary, which takes place in 2022, instead?  Let’s dive in and take a look at all of the possibilities that could be impacting why Disney World has not yet revealed any plans for the 50th.

Please keep in mind that this is pure speculation and Disney World has not confirmed any of this information at this time.

Due to the current COVID-19 pandemic happening around the world, Disney Parks have had to implement several different changes and protocols in order to operate safely during this time. These include social distancing measures, the requirement of wearing a proper face covering, increased hand sanitizing stations, the elimination of character meet and greets, parades and fireworks, and more.

As you can imagine, these new protocols could have an impact on how Disney World plans to celebrate this big milestone. For example, what’s a celebration without fireworks? Well, due to CDC guidelines and with safety being the number one priority for Disney World during this time, fireworks cannot operate as they could prior to the pandemic due to the large crowds they typically draw. Because of this, as well as with the current world’s situation constantly changing day-to-day, even if Disney World does have special fireworks planned for the 50th, they likely are not yet announcing them to see if they can even host them in the coming months.

Additionally, Disney World could have other ideas and plans in mind that they just don’t know, if, at this given time, they will be able to go through with. With the world’s situation constantly changing due to the pandemic, they could hope to have certain things worked out by October, however, it is still a few months away and so much can change by then. This could be the main reason why Disney World has yet to announce anything more concrete regarding the 50th — They simply don’t want to announce something and then have to take it back.

Due to the pandemic, the Walt Disney Company took a huge hit financially. In fact, the Parks, Experiences and Products division, now headed by Josh D’Amaro, recorded a loss of $2.4 billion in each of its third and fourth fiscal quarters.

It is clear that Disney Parks are trying to recover from the hit they took in 2020, even having to make the difficult decision to layoff over 30,000 Cast Members from the company.

Another huge milestone is around the corner — The 100th anniversary of The Walt Disney Company! Disney has already announced that D23 Expo is being pushed back to 2022 due to the current pandemic and will be called D23 Expo: The Ultimate Fan Event. It is also now going to be held in the same year as the 100th anniversary celebration, but what else does the company have in store?

Well, if Disney World does decide to make its 50th anniversary celebrations smaller than initially anticipated, they could have them go into 2022 and combine the 50th anniversary with The Walt Disney Company‘s 100th anniversary — Making it the biggest year yet!

What We Do Know!

Just recently, as of just a few weeks ago, D23 did share what is still set to open for the 50th anniversary at Walt Disney World, including Remy’s Ratatouille Adventure, set to open in 2021, and EPCOT is still going to be debuting its all-new nighttime spectacular — HarmonioUS.

At Walt Disney World, we’re excited to step into the future as EPCOT’s historic transformation continues, including the opening of Remy’s Ratatouille Adventure in the France pavilion! Additionally, our nights are about to be brighter with the addition of the new nighttime extravaganza, Harmonious, one of the largest nighttime spectaculars ever created.

However, they did not mention anything else planned for the 50th anniversary, again showing that whatever Walt Disney World has planned, they are really keeping it under wraps — whether that’s due to financial reasons, the pandemic, or something else.

Even though we aren’t sure what type of celebrations may be coming for the 50th anniversary, we do know that Disney World plans to debut two new attractions at EPCOT — Remy’s Ratatouille Adventure and HarmonioUS.

What do you think Disney World will do for its 50th anniversary celebration? Let us know in the comments below.