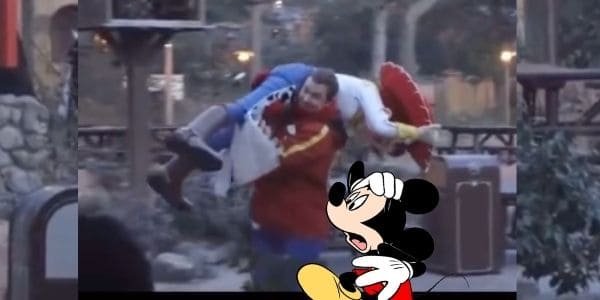 Maybe there really was a snake in her boot?

While at the Disney Parks, whether it be Walt Disney World, Disneyland, or the numerous international Parks, one of the highlights of visiting is getting to see all of the iconic characters that walk around and interact with you. You can meet a whole cast of characters, including Peter Pan, Mickey Mouse, Cinderella, Baymax, Wreck-It-Ralph, Rey Skywalker at Star Wars: Galaxy’s Edge, Starlord/Peter Quil at Avengers Campus, and a whole host of others at the Disney Parks.

Sometimes, however, the Cast Member who is friends with these fan-favorite characters experience a reason to have to walk away from Guests’ view.

Related: Tigger Takes Us Back to The ’90s in Hilarious TikTok

In a video uploaded to YouTube by Pixie Dust, a Cast Member dressed as Jessie from Toy Story can be seen walking around Disneyland while Guests watch. After a few seconds, however, Jessie starts making strange movements, pointing toward their leg and attempting to get the attention of other Cast Members around them. Eventually, a Cast Member approaches Jessie. See the full video below:

It is unknown why Jessie started making these movements or what was wrong with them, but eventually, they were carried off by a Cast Member away from Guests, which is when the video ends. Many users in the comments theorized that something was wrong with Jessie’s leg, which is why they needed help. We can see that no matter what, Jessie never broke out of her character and continued to wave and blow kisses to Guests.

The Cast Member who lifted Jessie likely did so for the safety of the character and because there was no other way to get them backstage without assistance. Disney Cast Members who work with characters are all trained to ensure that their safety is always being taken seriously. We can also see that Jessie is holding onto her hat to ensure that nothing would fall off while she was hanging upside down!

What did you think of this video? What is the weirdest experience you’ve had with a character at the Disney Parks? Let us know below!

Comments Off on Disney Character Carried Off After Bizarre Encounter