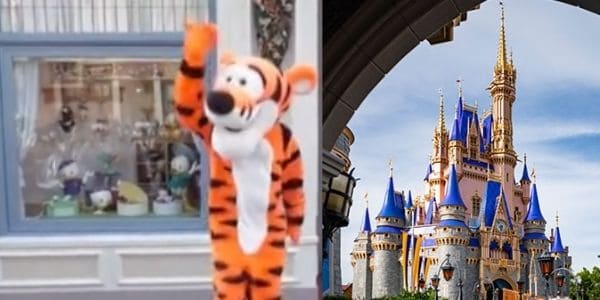 Watch Tigger throw it back to the ’90s in a fantastic TikTok.

Possibly one of the most famous and well-known aspects of all the Disney Parks are the characters that roam around. With wait times to meet these characters easily reaching multiple hours, this has proved to be a staple of Guests looking for some interactive entertainment. Guests can take photos with them, get autographs and interact in unique and hilarious ways. Sometimes if Guests are lucky, they’ll witness a character doing something really special such as running around, goofing off with other characters, or even dancing.

One lucky Guest posted a TikTok that shows Tigger energetically dancing in a way that can only be described as “a blast from the past”. As shown in the TikTok, Tigger is seen jumping and dancing to the Kriss Kross’ 92′ classic song “Jump”, putting on a grand yet humble show for the Guests who happened to be walking down Main Street, U.S.A. Disney Stuff! (@_disney._stuff_) on TikTok posted the video as shown below:

All of the Disney walk-around characters can be a joy to watch and interact with. Whether you’re waiting in line in the Magic Kingdom to meet Cinderella or you’ve got a reservation at one of the many restaurants which offer character meals like Chef Mickey’s or Animal Kingdom’s Tusker House at Walt Disney World, you won’t want to miss a chance of meeting all your favorite Disney icons while visiting the Disney Parks.

There’s a long list of characters Guests are able to meet while at the Parks including the classics such as Mickey and Minnie Mouse, Donald, Goofy, and Pluto who can be found at places like Fantasyland at the Magic Kingdom as well as newer characters like Rey, Kylo Ren, and Chewbacca who can be found at Star Wars: Galaxy’s Edge, Disney’s Hollywood Studios’ newest expansion.

Do you enjoy interacting with the walk-around characters at the Disney Parks? Who was your favorite character to meet?