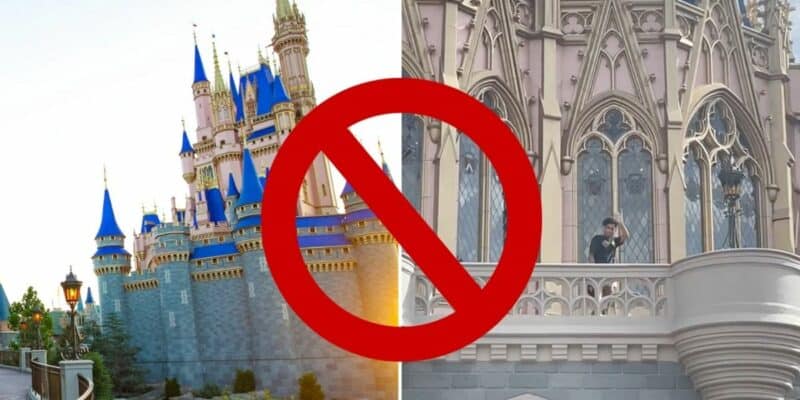 Last week, one Walt Disney World Guest caught the attention of Cast Members after climbing to a restricted section on the Cinderella Castle — the balcony at the rear of the Magic Kingdom icon.

While the original TikTok video captured the moment the Guest took to the balcony at the Disney Park and subsequently leaving due to the Cast Member and potential security presence, more information has come to light regarding this incident.

Out of Magic Kingdom, EPCOT, Disney’s Hollywood Studios, and Disney’s Animal Kingdom, Cinderella Castle is perhaps the most universally adored of the Disney Parks icons. The huge monument captures the magic of a Walt Disney World vacation, offering unique dining experiences at Cinderella’s Royal Table and impressive nighttime spectaculars like Happily Ever After.

In recent months, Cinderella Castle — as well as other locations like Spaceship Earth — have received updates in anticipation of the 50th Anniversary of the Walt Disney World Resort AKA “The World’s Most Magical Celebration”. Cinderella Castle welcomes Guests in a variety of ways, sure, but one Guest recently entered a “Cast Members Only” area to secure his own unique photo opportunity — something Disney Parks have strict measures about.

In the original video from @pincessshannon on TikTok we see the Guest atop the balcony having photos taken by someone of the ground. The Guest quickly retreats back down the staircase after being approached by Cast Members. Since this first video, the Disney creator released another video explaining more context of the incident, saying that the Guest seemingly walked past the Cast Members and back into the Park. Shannon states:

“There was a Cast Member telling him not to go up there but I guess he just did it anyway.”

From the comments on the creator’s video, we can ascertain that the Guest was allegedly issued a six-month ban from the Disney Resort — the information, however, came from an Instagram story that is now no longer available. These types of incidents rarely go unnoticed by Cast Members or security, and now the trespasser — known as Instagram Influencer, Nico Vacca — has spoken out about the incident that happened on his Disney vacation.

In an interview with Indy100/The Independent, Vacca said:

“Halfway through the day we saw a staircase that went up the castle on the side. The door was open, but it seemed weird that no one was going up. When I was already up, a girl came near my friend and asked him not to go up.”

“I asked my friend to take a picture of me from the ground – that was the point of going up – and then make a video.”

You can see Vacca visited Walt Disney World recently via his Instagram below.

The report goes on to detail that Vacca noticed the Cast Member coming towards him with a walkie-talkie, but says he had “already noticed it was wrong for [him] to be up there”.

“By then, I had already noticed it was wrong for me to be up there. So I went down and asked if everything was okay.

“She asked me how I got up and I said ‘with the stairs’ and she asked if the door was open. I said yes and she let me go.”

Indy100 explains what happened after the incident on the Cinderella Castle balcony:

A security guard later approached him about the incident, asking if he had gone up the castle, to which he replied that he had. Vacca was then given a trespassing order and was told he couldn’t come back until that warning had expired.

Interestingly, despite restricted areas usually being roped off with clear signage or behind closed doors, Vacca claims there was no barrier between the Park and the balcony.

“Afterwards, I talked to the security office to try and get it revoked. I made clear I knew what I was doing was wrong but that there were no signs and no security.”

As a reminder, the Walt Disney World Resort, as well as the other Disney Parks like the Disneyland Resort has strict measures in place when it comes to prohibited activities while on property. For the Florida theme park, the Disney Resort’s website shares guidelines they have in place to cater for the health and safety of all Guests on their Disney vacation. In addition, in their “Prohibited Activities” section of the “General Walt Disney World Property Rules”, Disney state doing the following are strictly forbidden:

The place on Cinderella Castle where Vacca entered is occasionally used by Cast Members, notably Anastasia and Drizella from Cinderella. Some Disney characters — especially during the pandemic while the meet and greets happen from afar — will use this area to engage with Guests visiting Magic Kingdom Park, keeping the Disney magic alive. But this area is always restricted to Guests.

Will you be visiting Walt Disney World for the 50th Anniversary? Let us know in the comments!