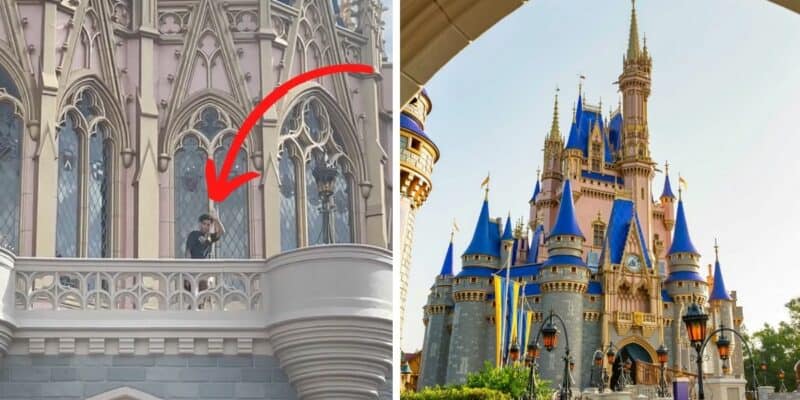 It’s not every day that Disney fans get to see a spectacular Princess castle up close and personal. However, ever since its grand opening in 1971, Guests visiting the Walt Disney World Resort in Orlando, Florida, have had the chance to walk through, dine inside, and view incredible fireworks around Cinderella Castle in Magic Kingdom.

Now, as the Disney Park gears up for its 50th anniversary celebrations, Cinderella Castle is looking completely amazing. So amazing, in fact, that a Disney Guest broke the theme park rules and climbed to a restricted area — the Cinderella Castle balcony.

Cinderella Castle in Magic Kingdom at the Disney Resort is one of the most famous icons of Disney’s theme parks. Standing stoic at the end of Main Street U.S.A, Cinderella Castle is a popular landmark of the Park and is the home of Cinderella’s Royal Table and, currently, Happily Ever After. While the other Parks — EPCOT, Disney’s Animal Kingdom, and Disney’s Hollywood Studios — have their own themed icons, the Castle truly captures the magic of Disney’s Imagineering in all of its magical, Princess, fantasy glory.

While areas surrounding the Castle can be approached, there are areas strictly off-limits to Guests. One of these areas is the balcony section at the rear of the Castle that looks over Fantasyland, where the windows to Cinderella’s Royal Table are. From time to time — especially during the pandemic when Disney characters were greeting Guests from afar — Guests could see characters like Anastasia and Drizella, the Wicked Stepsisters from Cinderella, for example, standing on the balcony, waving to and chatting with Guests who passed by. But even though this balcony area is accessible for Cast Members, it is restricted to Guests at all times.

Despite a roped-off staircase, one Guest on their Disney vacation decided to attempt his own photo opportunity recently, climbing to the restricted area while visiting the Park.

The video shows the Guest already on the balcony in the Disney theme park, waving down to the other visitors walking through Cinderella Castle, seemingly being photographed by someone else on the ground. You can then see Cast Members approaching the stairs as the Guest begins descending them. From the comments, we can ascertain some of what happened.

One Cast Member (in blue on the video) told the Guest that he should not be up there, which the Guest allegedly ignored. It is not known if anything happened later on in relation to the Guest and his ability to stay at the Magic Kingdom. Disney Parks has strict policies when it comes to maintaining the Guest’s Disney experience and managing health and safety at the Parks. It is highly important for all Guests to abide by the rules and never attempt to access an area that is restricted.

Despite events like this being a rare occurrence at Disney Parks, there have been a few incidents recently captured on social media that also break the rules of both the Walt Disney World Resort and the Disneyland Resort in California. Earlier this year, one Guest attempted to steal a cucumber from EPCOT’s Living with the Land attraction, while another Guest dressed, and performed acrobatics, in full Spider-Man attire while visiting Avengers Campus at Disney California Adventure — Guests posing as characters is a strict no from Disney!

Cinderella Castle welcomes you to a magical world where dreams come true. The 189-foot landmark boasts lofty spires and ornate turrets and is the gateway to Fantasyland.

Will you be visiting the Magic Kingdom for the 50th Anniversary celebration this year? Let us know in the comments!