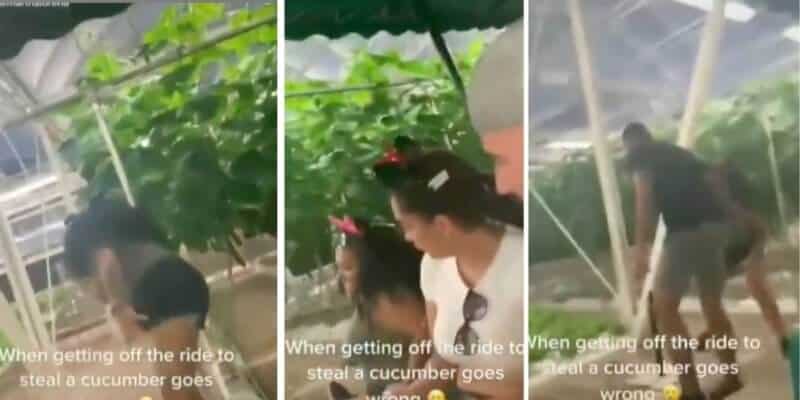 When Guests visit Disney World, their visit is often full of magic and memories that can last a lifetime! Not only does Disney immerse Guests with all of the highly Imagineered Disney Parks, Resorts, lands, and attractions, but they also ensure that Guests are enjoying a fun and safe vacation.

At times, however, some Guests break the rules, which can end in serious consequence depending on the circumstance. Recently, a video has been swirling on social media showcasing a Guest hopping out of the Living with the Land attraction at EPCOT to grab a cucumber. The original video was seemingly posted on TikTok by user marthalorena (@marthalorena) but has since been taken down.

That being said, it was posted long enough for others to save the video and post it to Instagram. DisneyDining reported that Alex (@alex64gaming) took to Instagram to repost the video. In the video, we can see the original username to be @marthalorena in the top left corner, and the name “Martha” is also said out loud.

As seen in the below screenshot, you can see the Guest leave the ride vehicle to grab the cucumber. The video also has text overlaying it, noting, “When getting off a ride to steal a cucumber goes wrong.”

As you can see, the Guest took a fall after trying to hop back in the boat, which is why Guests are asked to keep their arms and legs in the vehicle at all times when boarding the ride, as standing or exiting the attraction while in motion could cause serious injury to the Guest.

As we discussed, Disney has strict rules and regulations in place to protect Guests, Cast Members, and the integrity of their parks. For example, one specific rule indicates that it is prohibited to:

Engaging in any unsafe act or other act that might impede the operation of the Walt Disney World Resort or any part thereof.

We are unsure as to what the consequences were for this Guest; however, it certainly serves as an example of what not to do when visiting Disney World.

To learn more about the rules and regulations set out by the Walt Disney World Resort, click here! If you are ever unaware of whether something is or is not allowed, you can always ask a nearby Cast Member.