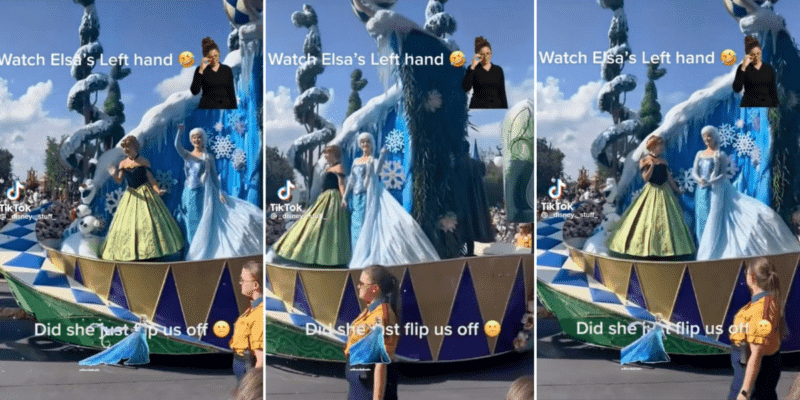 Viewers were shocked after watching a recently resurfaced video of a Disney character flipping Guests off at the Park.

One of the many things that make Walt Disney World Resort in Orlando, Florida, the Most Magical Place on Earth is the chance to meet your favorite Disney characters in real life. Guests can meet and interact with Mickey and Minnie Mouse, Goofy, Donald, Pluto, Cinderella, Aurora, Tiana, Captain Jack Sparrow, and even Chewbacca when they visit Walt Disney World Resort, adding extra Disney magic to their visit.

However, character interactions can sometimes be less than magical due to an unexpected incident, wardrobe malfunction, Guests behavior, or other unfortunate situations. A great example of this is a recently resurfaced video on Tiktok, where a Disney character seemingly flips Guests off from a parade float.

The video was shared by Disney Stuff! (@_disney._stuff_) and in it, we can see Anna and Elsa from the award-winning Disney film Frozen riding a parade float as they wave to Guests gathered around the parade route to see their favorite characters. However, by the end of the video, Elsa seemingly puts her left hand up, flipping Guests off as the float drives by.

The video caused mixed reactions among viewers, from those shocked to see such a scene occur at a Disney Park to those who found the incident hilarious.

While it would appear that Elsa flips Guests off during this daytime spectacular, the character would’ve never done such a thing, as it would clearly go against Park rules and regulations for Guests and Cast Members. Instead, it’s the angle of the video and its low quality that make it look as if the character had made the rude hand gesture during the parade.

Guests can meet the characters of Frozen, along with characters from Tangled, Peter Pan, and The Little Mermaid, on the Disney Festival of Fantasy Parade. This magical parade is described by Disney as follows:

Have you ever seen a bizarre character interaction at Disney World? Tell us about it in the comments below!