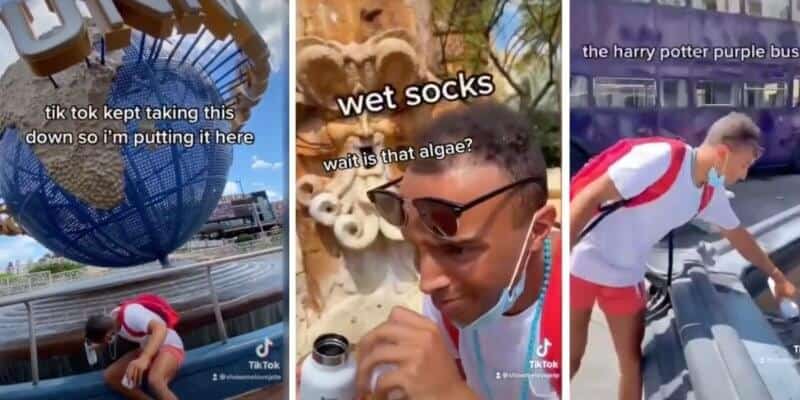 It is no secret that Orlando can get pretty toasty, and if you are exploring the theme parks like Universal Orlando Resort or the Walt Disney World Resort, Guests may crave a cold drink of water.

That being said, if you are thirsty, Guests have many options to quench that feeling! You can purchase a beverage, ask for a cup of water at a quick service location, or use a water fountain station to fill your personal water bottle. However, filling your bottle with the water from one of the themed, decorative fountains is not the safe option.

TikTok Jason Jeter (@showmelovejete) has recently been in the spotlight for several controversies. He took to social media to promote a water bottle company by filling the bottle with water from various decorative fountains across the two largest theme park resorts in Orlando. And, as these water fountains are decorative and the water in them is not meant to be consumed, it’s clear that neither Walt Disney World Resort nor Universal Orlando Resort would want a Guest to drink from them (and then post a video of them doing so online).

When it came to Disney, we recently reported that Jeter not only lost his position as a Cast Member for doing this as well as trespassing, but he has also received a lifetime ban from the theme parks.  As we previously mentioned, it is possible that Jeter broke other rules at Walt Disney World while he was working as a Cast Member as well, but further details are unclear at this time.

Related: Fans start “Why I got kicked out of Disney” trend on Twitter

He made a similar video about drinking from Universal Orlando’s decorative fountains, but TikTok kept deleting it from the social media platform as it was promoting dangerous actions. He then uploaded the video to YouTube, which has since been removed or made private. Please note, that actions in the video are harmful and dangerous, and you should not try this yourself.

Now that Jason is no longer allowed at Disney, he has been posting a lot more Universal content. Following losing his job at Disney World, has called Hogwarts his “new castle”.

It seems Universal, however, is also aware of the content Jason creates as they just called out the viral TikTok user on Twitter.

PSA: Made for splashing, not drinking.

They also shared a photo of their super soaker attraction Dudley Do-Right’s Ripsaw Falls below it. Take a look:

PSA: Made for splashing, not drinking. pic.twitter.com/r3xqGSrQXQ

Considering the news of Jason being banned from Disney has been all over social media, and he has shared similar videos of himself at Universal, it seems that Universal Orlando Resort is acknowledging that they are aware of the situation in a very cheeky way, which is very in theme with Universal’s Twitter behavior.

At the moment, Jason has not stated that he has received any ban from Universal, however, it is clear that the theme park is watching him, as we have seen with this public warning.

What do you think about Universal’s Tweet and the ongoing situation? Let us know below.