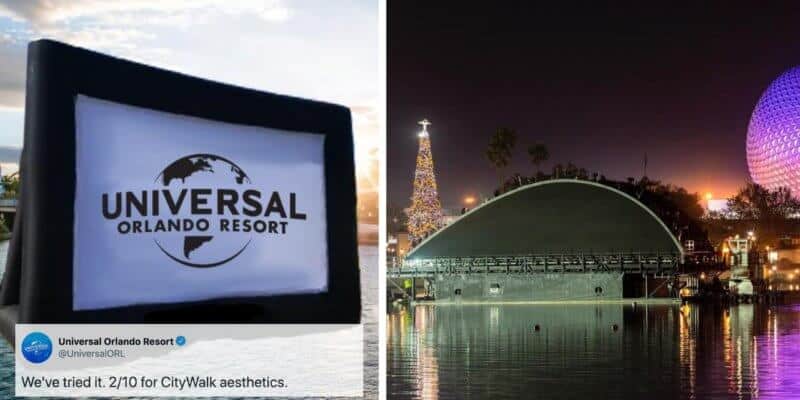 Universal Orlando Resorts Twitter account has always been a source of comedy, especially during the coronavirus pandemic. The account is relatable and never takes themselves too seriously, which in my opinion bodes well in terms of creating a casual relationship with their guests. But sometimes, they like to poke fun at their competitor, and Disney World becomes the source of their joke.

We know that Disney World is set to release HarmoinoUS, an epic nighttime spectacular at EPCOT which is set to be the biggest evening show that Disney has ever attempted. The news circuit has been very focused on HarmonioUS lately as the center barge which will showcase a giant screen, has been moved into place on the World Showcase Lagoon. There are 4 more to go, but this is the start to having the show begin testing, which means fireworks are soon returning to Disney World, and not just any fireworks, but mind-blowing ones.

Universal has had lot’s of attention on them lately because their latest coaster, VelociCoaster, set to open summer 2021 has been testing and is making lots of guests very excited to ride, but now that that attention shifted it seems that there may be a little jealousy or fun play going on with Universal.

Universal Orlando’s Twitter posted a photo of a photoshopped screen on the water of CityWalk saying “We’ve tried it. 2/10 for CityWalk aesthetics.” This is a clear jab to the latest HarmonioUS barge, which as we noted, is a big screen in the middle of a lagoon. Universal is slyly hinting that this is going to not look too attractive to Disney World Guests, diminishing and minimizing the excitement that it currently being shared on Twitter about the new show.

Universal loves to troll at Disney, for example, if you ever rode Jaws, the last family that rode the ride is a group of skeletons with Mickey ears on, and Twister has a tire spinning in the queue, and if you wait long enough to see it stop, you will see it is running over Mickey ears.

Do you think Universal Orlando is taking it too far with the Disney World jabs?