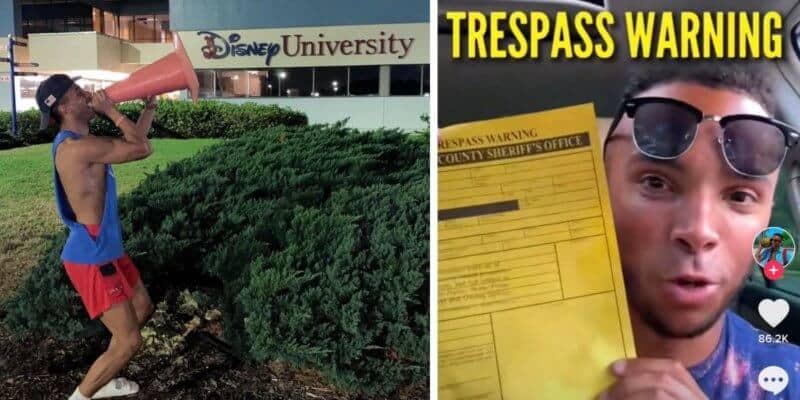 When you are at Disney, of course, Guests can enjoy all the attractions, watch the shows, meet their favorite characters, take photos in front of Cinderella Castle, and create the best memories! But, while doing so, Guests must remember that they are on private property, and Disney has their own set of rules that Guests must abide by.

These rules are typically what you would expect, as Guests cannot bring firearms or drugs into the parks, you cannot steal, break into the property, impersonate Cast Members or Disney characters, and so on. For a full set of all the rules and regulations at Disney World specifically, click here for the official details.

One TikToker recently viral after creating many TikToks in which he broke some of the rules that Disney World has set in place. Jason Jeter (@showmelovejete) is an ex-Cast Member who blew up on social media for posting a TikTok about drinking from Disney fountains (that are designed for decorative purposes only), as well as exposing restricted areas on the social media platform (he entered the Disney wedding pavilion, which was closed at the time).

It is possible that Jeter broke other rules at Walt Disney World as well, but further details are unclear at this time. As the rules above state, showing unsafe acts at Disney World, as well as restricted areas, is prohibited. Jeter ended up losing his job at the Walt Disney Company after he shared videos of himself partaking in these acts online. He shared the news on TikTok:

Afterward, Jeter continued to visit the parks as a Guest; however, his content continued to often break the rules set out by Disney World. Disney was very aware of what Jeter was posting online

In the below TikTok, Jeter claims that after visiting Blizzard Beach, Disney security approached him and asked if he was making a TikTok while visiting the water park, which is not something many content creators worry about as long as they are following the rules on Disney property.

Now, it seems Disney has decided to ban the TikToker from their property forever. In Jason Jeter’s latest TikTok, he says that he was stopped at Disney’s Grand Floridian by Cast Members who with the help of law enforcement handed him a Trespass Warning form and explained that he had been banned from Disney Property for life. As you can see from the video, the Disney fan is moved to tears.

Disney World is a place where Guests can have plenty of fun, magical experiences, but if you are breaking their rules, there are consequences. It is important for Guests to remember that Disney is private property and the company has certain rules and regulations in place in order to keep all Guests and Cast Members safe. Breaking the rules — and then documenting the rule-breaking online — can result in serious consequences. In Jeter’s case, he has been banned for life.

At the moment, on top of the general rules, there are added requirements for Guests entering the park due to the pandemic. Guests must undergo a temperature check, wear an appropriate face covering at all times unless stationary and actively eating, drinking, or taking an outdoor photo, as well as social distancing. If Guests refuse to abide by the rules, they will be removed from the park as well. Currently, Disney warns Guests, for example, that if they do not comply with face mask rules, they will have to leave Disney property.

For a more specific list of what is not allowed at Disney Parks, click here to read more.

Remember to always be aware of what Disney rules and standards are before visiting any Disney property so that you can be prepared to follow the rules and you are aware of potential consequences. If you are ever unaware of whether something is or is not allowed, you can always ask a nearby Cast Member.