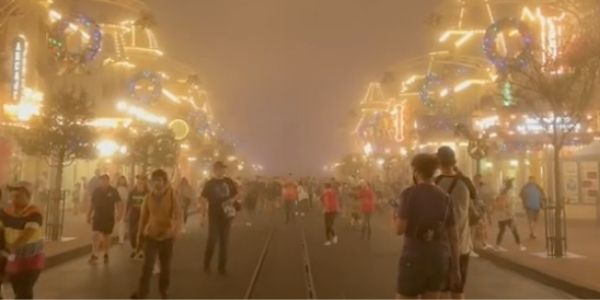 Was it just smoke and mirrors?

Guests visiting the Walt Disney World Resort are not only in for a thrilling experience with attractions like Space Mountain and Expedition Everest, but also a visual experience with all of the incredible theming. From the stores in Batuu in Star Wars: Galaxy’s Edge at Hollywood Studios to the incredible attention to detail in EPCOT’s World Showcase, Disney Guests have a plethora of amazing visual treats to choose from.

Perhaps the most famous example of visual theming in any Disney Park is the iconic Cinderella Castle that stands at the end of Main Street, U.S.A in the Magic Kingdom.

Though New Year’s Eve celebrations were canceled due to COVID-19 in Disneyland Paris, Guests were still able to celebrate stateside. In a TikTok posted by ResortTV1 (@resorttv1), Guests ended their day in a foggy haze at the Magic Kingdom in Walt Disney World. See the full video below:

Related: More Flights Canceled Out of Orlando – NOT Related to COVID

As seen in the video, the Cinderella Castle vanished from Guests’ sight due to either the fog or fireworks that happened that night. The video was posted near New Year’s Eve so it’s possible the fog is actually smoke from the huge display of fireworks that happened during the holiday at Walt Disney World. As Guests looked down toward the castle, it completely disappeared leaving quite a crazy sight for Guests exiting the Park.

Speaking of new Year’s Eve at the Disney Parks, Guests could celebrate in style at all of the Parks including Magic Kingdom, EPCOT, Hollywood Studios, and Animal Kingdom. EPCOT had a grand celebration, setting off some incredible fireworks. In a TikTok posted by Inside the Magic’s own Alessa Dufresne (@thatdisgirl), an insane amount of fireworks can be seen getting set off.

Related: Disney in Danger of Losing Copyright Protection For Many Beloved Characters

Did you ring in the new year at Walt Disney World or Disneyland? What’s your favorite holiday to celebrate at the Disney Parks? Let us know below!