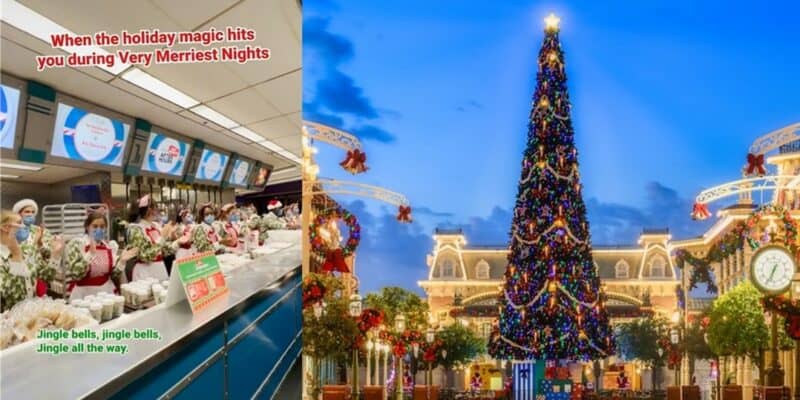 It’s the most wonderful time of the year! Walt Disney World’s four Parks are bursting with holiday experiences such as EPCOT’s International Festival of the Holidays, Disney’s Hollywood Studios Sunset Seasons Greetings, and Disney’s Animal Kingdom Merry Menagerie. Of course, the most magical place to be for the holidays in our opinion is at the iconic Magic Kingdom Park where you may just spot a few Cast Members celebrating the holidays with song!

Disney Parks recently took to TikTok to share a video of several Cast Members stationed to hand out complimentary snacks that go along with the party ticket for Disney Very Merriest After Hours. The Cast Members break into song for the holiday season! Check out the video below:

RELATED: Is $249 Too Much For a Disney Christmas Event? Fans Speak Out

This is exactly why we love Cast Members! While we Disney fans may find ourselves grumbling over pausing ticket sales, Disney CEO Bob Chapek, and removed Resort Guest perks… Cast Members always seem to deliver the true pixie dust both behind the scenes and when stepping foot on stage.

If you haven’t already purchased tickets for Disney Very Merriest After Hours, there is still time! The remaining event dates that have yet to sell out include November 28, 30, and December: 2, 3, 5, 9, 10, 12, 14, 16, 17. You can check out all the details and purchase tickets on the Walt Disney World website.

Have you attended or plan to attend Disney’s Very Merriest After Hours at Magic Kingdom? Let us know about your experience.

Comments Off on Disney Cast Members Break Into Song for the Holidays!