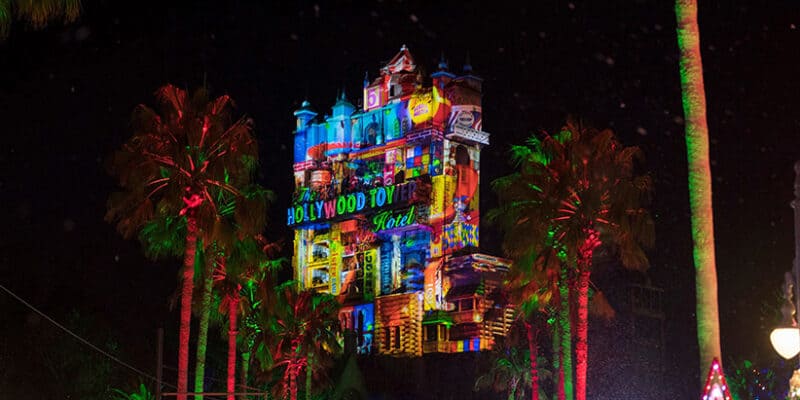 ‘Tis the season to be jolly…in Hollywood! Disney has confirmed the return of magical holiday delights at Walt Disney World Resort, and today we got more details about what’s coming to each theme park this holiday season.

CLICK HERE to Read About the Holiday Offerings Returning to Disney’s Animal Kingdom!

We love all of the Disney theme parks during the holiday season, but the classic vibe of Disney’s Hollywood Studios makes this Park a Guest-favorite year after year. The decorations alone are enough of a reason to make this Park a must-do on your Christmas Disney trip!

Per an announcement on Disney Parks Blog, magical holiday entertainment is returning to Disney’s Hollywood Studios this year. The announcement states that we will see a stunning transformation on the Hollywood Tower Hotel for the holidays (in addition to the Beacon of Magic transformation nightly!). Plus, some holiday fun will be added to the Frozen sing-along show!

Sunset Seasons Greetings returns to Disney’s Hollywood Studios, where each evening holiday magic transforms the famous Hollywood Tower Hotel into a Muppets gingerbread masterpiece, a “Toy Story” toy hotel, a snowy corner of Arendelle and a Dickensian village from “Mickey’s Christmas Carol.” As a part of the 50th anniversary celebration at Walt Disney World Resort, the festive fun continues when Hollywood Tower Hotel becomes a Beacon of Magic at night, awash in an EARidescence evoking all the glimmer and shimmer of the golden age of imagination and adventure.

Just in time for the holidays, “For the First Time in Forever: A Frozen Sing-Along Celebration” adds a festive finale, featuring everyone’s favorite snowman, Olaf, and celebratory songs of the season.

For even more information on holiday season happenings at Walt Disney World, read our guide here, visit the official Disney World website, or reach out to a Disney travel agent to book a trip.

Are you planning to visit the Disney Parks for the holiday season to take in all of the decorations, entertainment, and festive fun? Let us know in the comments!