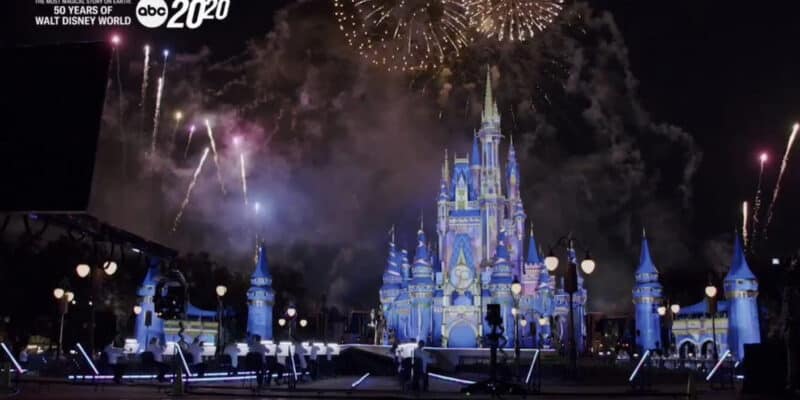 The World’s Most Magical Celebration — the 50th anniversary of Walt Disney World Resort in Florida, The Most Magical Place on Earth — officially kicks off this Friday, October 1. There has been so much excitement leading up to the celebration, including magical sneak peeks of some big reveals from Disney Parks.

Some of the sights we’re most excited for are the Disney Beacons of Magic on display at each of the four theme parks!

This week, ABC took to social media to preview the television special that will air on Friday in honor of Disney World’s 50th. The TV special will go behind the scenes and show viewers all of the magic that Disney has in store — and all of the work that has gone into making that magic happen!

Go behind-the-scenes with us for a look at magic in the making of the #DisneyWorld50 performances! Sparkles And stay tuned for special interviews during the @ABC2020 Special, Friday on ABC and Stream next day on Hulu! @WaltDisneyWorld http://bit.ly/3kUCxRL

Go behind-the-scenes with us for a look at magic in the making of the #DisneyWorld50 performances! ✨ And stay tuned for special interviews during the @ABC2020 Special, Friday on ABC and Stream next day on Hulu! @WaltDisneyWorld https://t.co/mTPXwT1jqp pic.twitter.com/JQbT0dbIQg

At the end of another video preview, Disney shares a sneak peek of the four theme park icons (Cinderella Castle at Magic Kingdom, Spaceship Earth at EPCOT, The Hollywood Tower of Terror at Disney’s Hollywood Studios, and The Tree of Life at Disney’s Animal Kingdom) as the four “Beacons of Magic.” We catch a glimpse of them in the final few seconds of the video. Take a look:

What’s your one word to describe  @WaltDisneyWorld? Celebrate #DisneyWorld50 with our  @ABC2020 Special this Friday at 8/7c on ABC. Stream next day on Hulu.

What’s your one word to describe @WaltDisneyWorld? Celebrate #DisneyWorld50 with our @ABC2020 Special this Friday at 8/7c on ABC. Stream next day on Hulu. pic.twitter.com/kLJ1oDlJnX

The four Beacons of Magic will truly help the theme parks come alive every night of the 50th anniversary celebration. Per the official website, here is how they are described:

The World’s Most Magical Celebration will light up with wonder as the theme park icons are transformed into Beacons of Magic, beckoning all to come and celebrate.

Epcot
Lights shine from within Spaceship Earth’s reflective panels as stardust emerges to symbolize beacons of possibility and optimism.

Disney’s Hollywood Studios
The iconic Hollywood Tower Hotel glitters with EARidescence, evoking the glimmer and shimmer of the golden age of imagination and adventure.

Disney’s Animal Kingdom Theme Park
A warm and glorious light emanates from the Tree of Life, as enchanted fireflies gather to call forth the magic of nature.

Because the 50th anniversary celebration hasn’t yet begun, we only have sneak peeks of the Beacons of Magic thanks to ABC, but below we have included the concept art as well as the sneak peeks for you to see!

Are you excited for Walt Disney World’s 50th anniversary, The World’s Most Magical Celebration, to begin? Let us know in the comments!

We can help you book the Disney trip of a lifetime! Walt Disney World’s 50th lasts a full 18 months, giving you until early 2023 to experience the magic. Click here to make your vacation dreams become a reality!