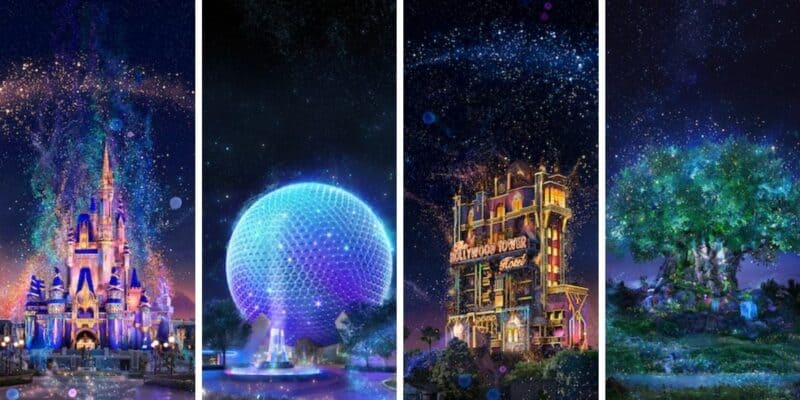 Now, we have more information relating to the Beacons of Magic that will debut at each of the theme park icons.

Now, we know that the Beacons of Magic will be joined by special music just for this milestone! Platinum-selling songwriter and music producer Alana Da Fonseca created an original anthem for Disney World’s 50th as she collaborated with award-winning composer Emily Bear and singing phenom Journi on “The Magic Is Calling”.

It’s going to be quite the celebration. And what’s a celebration without music? Platinum-selling songwriter and music producer Alana Da Fonseca answered the call to create an original anthem for the 50th Anniversary, collaborating with award-winning composer Emily Bear and singing phenom Journi on “The Magic Is Calling.” Da Fonseca’s pop music style, Bear’s soaring orchestrations and Journi’s magical vocal performance come together to create a song that is all at once nostalgic, inspirational and contemporary.

Disney Parks Blog also released a short video clip of the new music Guests can hear, which you can check out below.

Additionally, we have more concept art showcasing just what Guests can except from the Beacons of Magic, courtesy of Disney Parks Blog. The Beacons of Magic at each theme park will light up the night sky as they are all connected by “The Magic Is Calling”.

First up, we can see Cinderella Castle glowing and sparkling in the concept art below.

The Tree of Life will also light up at night. Disney Parks Blog recently explained the 50th anniversary celebrations happening at this theme park as “magical fireflies inhabiting the Tree of Life at Disney’s Animal Kingdom Theme Park.”

The iconic Tower of Terror will also transform once the sun goes down. Though Disney Parks Blog did not give many details, they did share that Guests can look forward to “special new touches coming to life on the Hollywood Tower Hotel at Disney’s Hollywood Studios.”

And lastly, Spaceship Earth will be part of the Beacons of Magic as this EPCOT icon will glimmer and sparkle at nighttime, which you can see in the concept art below.

Throughout the 50th Anniversary Celebration, “The Magic Is Calling” will also be included in special live entertainment moments across Walt Disney World Resort. You’ll hear the anthem during Mickey’s Celebration Cavalcade, featuring the “EARidescent 8” each day at Magic Kingdom Park, and listen for custom arrangements of the song performed by everyone from the Main Street Philharmonic and Dapper Dans to the Discovery Island Drummers and Voices of Liberty.

Stay tuned to Inside the Magic as we will be sure to update you as we get more information regarding Disney World’s 50th anniversary!