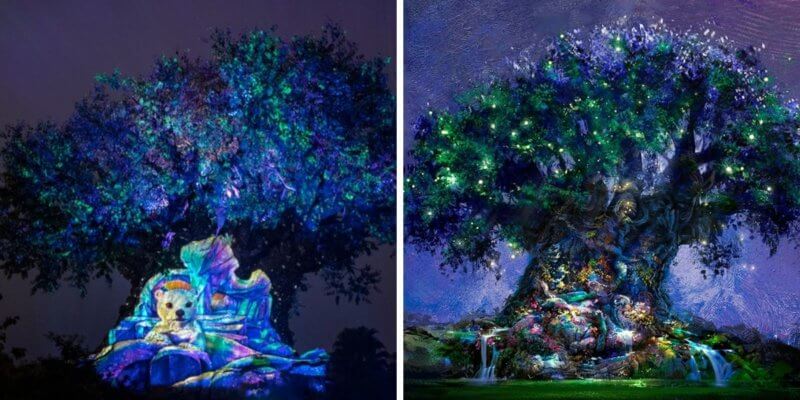 One thing Guests look forward to every night at Disney’s Animal Kingdom is the Tree of Life Awakening — but for the 50th anniversary celebration, kicking off on October 1, and for the holiday season later this year, the Tree of Life will transform — depending on the night.

What we mean by that is Disney has confirmed special projections for each event — the 50th and the holidays — will be showcased on the theme park icon, but as far as which projections Guests will see will depend on which day they visit Animal Kingdom.

For starters, in case you aren’t familiar, Disney World describes the Tree of Like Awakening as:

We already knew that Guests can look forward to something very similar to the Tree of Life Awakening come October 1, 2021! Disney Parks Blog explained the 50th anniversary celebrations happening at this theme park as “magical fireflies inhabiting the Tree of Life at Disney’s Animal Kingdom Theme Park.”

And now, we have additional information regarding the holiday season at Disney’s Animal Kingdom, which will overlap with the 50th anniversary celebration.

Despite both of these events happening at the same time, Disney’s Animal Kingdom will display both the 50th anniversary projections and the holiday projections, depending on the night.

It will be a wild holiday time at Disney’s Animal Kingdom Theme Park with the return of seasonal décor and festive Disney character flotillas sailing down Discovery River to the sounds of joyful songs of the season. The park’s centerpiece – The Tree of Life – becomes another Beacon of Magic most nights during the 50th anniversary celebration. During the holiday season there’s even more magic inspired by nature as the holiday edition of Tree of Life Awakenings also takes place most nights.

There is so much to look forward to later this year — We cannot wait to see the Tree of Life transform.

Related: No Lights on Cinderella Castle This Holiday Season