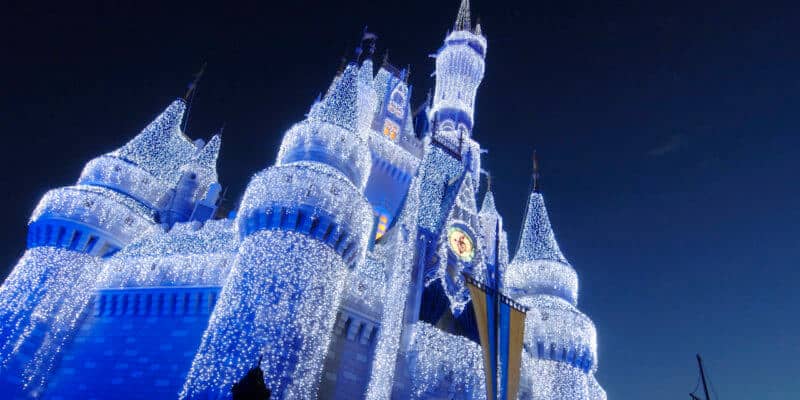 Disney Parks Blog has just announced some major Christmas news as part of the Halfway to the Holidays virtual celebration. But one major Christmas component was left out of the announcements: the Dream Lights on Cinderella Castle.

Disney announced on Monday that there are some spectacular holiday festivities coming to the Disney Parks and Resorts this holiday season. However, the Cinderella Castle Dream Lights were left out of the announcements. Disney has not said that the lights will be installed on Cinderella Castle as part of this year’s holiday celebrations, marking the second year in a row without the Cinderella Castle Christmas lights (last year, we saw special holiday projections and even small pyrotechnics instead — and they were amazing!).

Additionally, when Disneyland Resort celebrated the 60th anniversary — the Diamond Anniversary Celebration — Sleeping Beauty Castle did not receive all of its usual holiday decorations. The castle normally gets a snow-capped roof every holiday season, but when the 60th-anniversary festivities were taking place, the castle had kept its special diamond-inspired roof that was installed specifically for the celebration. The snow-capped castle did not return until the holiday season after the 60th anniversary was over. But we can confirm that the holidays were still magical at Disneyland!

The 50th anniversary at Disney World will also last through early 2023, meaning there are two holiday seasons (2021 and 2022) when the 50th anniversary festivities — including special decorations like those currently on Cinderella Castle — will be taking place.

But even though this will be the second year in a row without the Dream Lights, that doesn’t mean the castle will not look magical. Here’s what Disney shared today:

Holidays are sure to be enchanting at Magic Kingdom Park, where quintessential decorations will return to Main Street, U.S.A. When the sun sets, special holiday projections will appear most nights on Cinderella Castle, alternating periodically with the castle’s transformation into a Beacon of Magic.* What a great way to celebrate the holidays and the 50th anniversary of Walt Disney World Resort!

We can confirm that the projection show on Cinderella Castle is absolutely stunning. Disney truly knows how to “wow” a crowd, and from our experience at Magic Kingdom during the holiday season last year, Guests came from all across the Park to watch the projections on the castle. They are not the Dream Lights, but they are certainly spectacular and fun in their own magical way!

Hopefully, during the 2023 holiday season when the 50th anniversary celebration is over — and, presumably, all of the decorations are removed from the castle — we will see the return of the Dream Lights on Cinderella Castle. For now, however, Disney has not shared any information about the future of the lights, so we will have to wait and see!

What do you think of the lack of Cinderella Castle Dream Lights during this year’s Christmas season at Walt Disney World? Are you excited to see something new instead? Let us know in the comments.