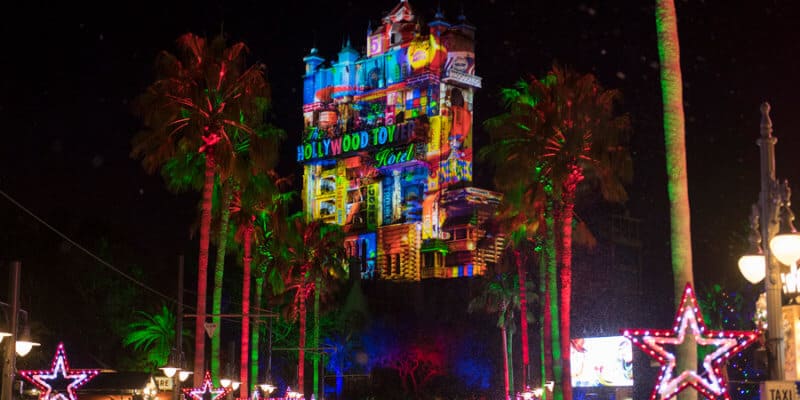 Tower of Terror is a popular ride located at Disney’s Hollywood Studios in Walt Disney World Resort. Typically, this ride is considered “scary” or “spooky” as it takes Guests into the 5th dimension after hopping aboard a maintenance service elevator, but during select months, the Tower of Terror transforms into a magical delight!

And for the 2021 holiday season, the attraction will once again transform into what many know as the Hollywood Holiday Tower Hotel!

Sunset Seasons Greetings returns to Disney’s Hollywood Studios, as the Hollywood Holiday Tower Hotel on Sunset Boulevard will twinkle once again with projection effects, magically transforming into a snowy corner of Arendelle, a Muppets gingerbread masterpiece, a Toy Story toy hotel, and a Dickensian village inspired by “Mickey’s Christmas Carol.” This holiday show will also alternate with the tower’s nightly transformation into a Beacon of Magic.

Related: Disney’s Hollywood Studios Decked The Halls for the Holidays!

Disney Parks Blog also shared that Santa Claus will return to Disney’s Hollywood Studios in a cheerful motorcade, Guests will be able to enjoy the festival finale at For the First Time in Forever: A Frozen Sing-Along Celebration, and Minnie Mouse will once again host her festival meal at Hollywood & Vine:

Santa Claus will bring some North Pole cheer to a motorcade down Hollywood Boulevard. You will also be able to enjoy “For the First Time in Forever: A Frozen Sing-Along Celebration,” with its festive finale featuring everyone’s favorite snowman, Olaf. Minnie Mouse is also returning to host her festive meal at Hollywood & Vine at Disney’s Hollywood Studios. Minnie and her friends will be donning their holiday best – even Santa Goofy will be there! And throughout the season, vintage-themed holiday décor will shine bright across the park.

Related: Tower of Terror Takes Next Step in Returning to Normal Operations

If you want to visit Disney World in 2021 to celebrate the holidays, make sure to begin planning your magical vacation today. Our friends at Academy Travel can help you every step of the way. Get started by clicking here!

Comments Off on Tower of Terror Will Receive Magical Holiday Transformation