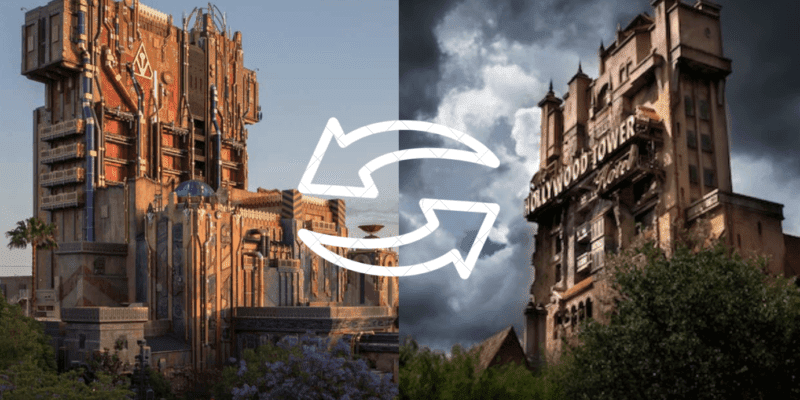 When the Disneyland Resort replaced The Twilight Zone Tower of Terror at Disney California Adventure, many Disney fans were outraged at first, and who can blame them? Watching the classic Tower of Terror attraction leave California for good was a tough pill to swallow. But now that the ride has been re-themed to Marvel’s Guardians of the Galaxy, and Guests are in love.

So, should Tower of Terror at Disney’s Hollywood Studios be re-themed to the Marvel IP?

Depending on whether or not Disneyland or Disney World is your home resort, your opinion on this debate may sway. Many Disneyland Resort Guests have personally told me that Guardians of the Galaxy: Mission Breakout made the drop ride so much more fun with the epic soundtrack music that accompanies Guardians of the Galaxy, plus any excuse to see Groot usually sounds like a great idea.

On Guardians of the Galaxy: Mission Breakout Guests accompany:

Star-Lord, Gamora, Rocket, Drax and Groot are held captive in electrified glass cases that dangle perilously over an abyss. When Rocket escapes, he commandeers a gantry lift and enlists your help on a harrowing mission to rescue his fellow Guardians. Prepare to unleash intergalactic mayhem from the top of the fortress to the bottom, as one of Star-Lord’s awesome mixtapes blasts a classic tune!

You get to go along with the Guardians gang, and also enter the first MCU thrill attraction at Disney as we await the opening of Avengers Campus. If the overall action-packed adventure wasn’t enough, a really cool feature of this attraction is that it has 6 storylines going on. This means that you have 6 opportunities to basically ride a completely different ride. The Twilight Zone Tower of Terror may have different drop sequences, but the storyline is always the same.

Ok, so I think it’s safe to say that Guardians of the Galaxy: Mission Breakout is an epic attraction, and thanks to Imagineering, the updated technology also enhances the attraction experience. Since the attraction is so amazing, it should just come to Disney’s Hollywood Studios, right?

Honestly, I don’t think so. The Twilight Zone Tower of Terror originated in Hollywood Studios, which makes the ride more sentimental to Disney World park goers. Tower of Terror serves as the weenie at Hollywood Studios being visible from many spots on Disney property, including EPCOT! If you didn’t know, TOT is themed to fit the skyline aesthetic of the Morocco Pavilion since it is visible from there, so a re-theming may ruin that view!

The moment you turn to walk down Sunset Boulevard, you are drawn into the looming facade of Tower of Terror. Billboards greet Guests from the moment they begin heading to the attraction, almost allowing Sunset Boulevard to act as part of the queue experience as it sets this eerie tone for the ride.

And if we are talking queues, Tower of Terror has, in my opinion, the best queue at Disney World. You get to walk around the grounds of The Hollywood Tower Hotel, see the incredibly detailed and abandoned lobby, and go into the eerie library to watch the iconic pre-show.

Plus, Cast Members get really into their spooky character for this ride, much like you see at Magic Kingdom or Disneyland’s Haunted Mansion. It’s a small detail that heightens the immersive feeling of the attraction to a new level.

Tour the infamous Hollywood Tower Hotel, the onetime haunt of Tinseltown’s rich and famous until a mysterious incident forced it to close in 1939. Amble under the iron-wrought gates of the abandoned abode and wind your way through a neglected, weed-filled garden before stepping inside a dusty lobby, seemingly frozen in time.

Edge into a dark library with strange artifacts. As lightning illuminates the darkened room, a nearby television set springs to life and Rod Serling welcomes you on a journey into the Twilight Zone.

From a secret passage, trudge into the shadowy confines of the dilapidated boiler room, home to rattling machinery and your vessel into the 5th dimension. Enter the rickety, elevator-style lift and strap yourself in, light bulbs spookily flickering on and off above you.

Launch upward in darkness until the corroded doors unlock to expose a lengthy hallway inhabited by the otherworldly hotel inhabitants from 1939. Beckoning for you to join them, the spooky specters dematerialize and your skyward journey continues.

At the 13th floor, a collection of sights and sounds inspired by the opening credits of The Twilight Zone come into view. Journey through this star-filled realm and prepare to discover what lies beyond the darkest corner of imagination.

Shriek in terror as you suddenly hurl down the abandoned shaft that unexpectedly changes direction and launches back up the hotel. Gaze out through a missing wall 13 stories high as the doors inexplicably open and close to reveal the hotel grounds. As if possessed by some unseen phantom, plummet down and speed upward over and over again, the sound of cables snapping and metal clanging overhead. 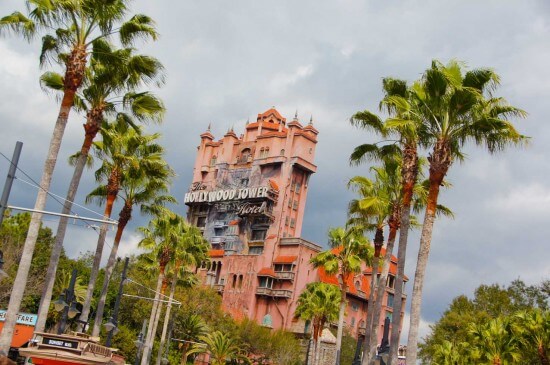 Tower of Terror at Disney’s Hollywood Studios is also a much longer attraction than the Tower of Terror we saw at DCA. There is a very cool Imagineering moment where your detach from your track and your elevator travels through “space and time” and then makes its way into the real elevator shaft where you will have your stomach churn. This feature in itself makes the Tower of Terror at Hollywood Studios very unique, and would also mean a re-theming would need to include this slow moving travel section, which is something I have a hard time believing would fit in the fast-paced and energetic Mission Breakout attraction. The length this slow move pulls into Tower of Terror only caters to it’s haunting nature and leaves Guests anticipating what could happen next.

So in the end, do I think we should be re-theming the scary Tower of Terror attraction at Hollywood Studios to get some Star Lord action on the attraction? Although Guardians of the Galaxy: Mission Breakout fits great at Disney California Adventure, the old school Hollywood aura Tower of Terror brings to Hollywood Studios fits the park too perfectly to change. Plus, the entirety of Sunset Boulevard depends on the attraction being at the end to welcome Guests to the 5th dimension, removing that would mean the entire strip would need a re-theme, which in-turn is the majority of the front half of Hollywood Studios.

What do you think? Should Disney re-theme Tower of Terror to Guardians of the Galaxy: Mission Breakout?

Editors Note: The opinions expressed in this article do not necessarily reflect those of Inside the Magic overall.