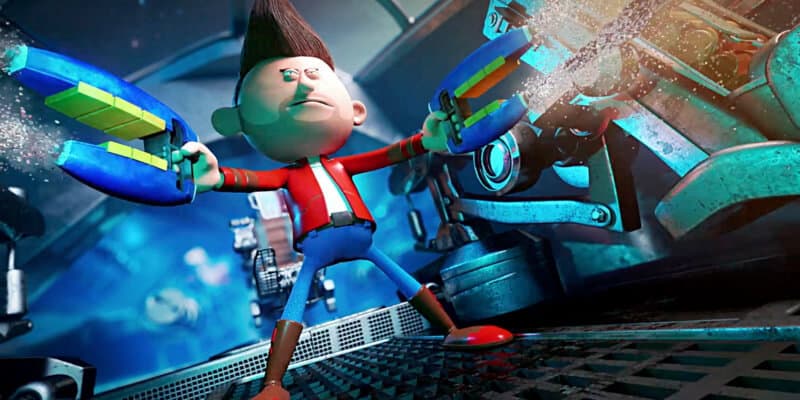 Kicking off Sunday, May 5, “Marvel’s Guardians of the Galaxy: Mission Breakout!” will feature distinct animation styles in a multipart story arc with two back-to-back episodes on Disney XD and DisneyNOW.

In the new storyline, the Guardians, desperate to escape the Collector’s collapsing ship, jump into the Black Vortex Mirror and find themselves separated and trapped in strange new worlds. Crossing time and dimensions, each world was developed using different animation techniques to visually support the storytelling, including CG-stop motion, children’s book illustration and 8-bit, motion comic. This is all firsts for a Marvel animated series as well as Golden Age and traditional CG. Check out the different styles of animation below.

The premiere schedule is as follows:

“Black Vortex, Part One” When the Guardians become separated in the Black Vortex, Gamora wakes up in a children’s fairy tale, while Drax is trapped in a comic book.

“Black Vortex, Part Two” While caught in a CG sinister packing factory, Rocket must search for his best friend Groot and escape.

“Black Vortex, Part Three” Quill finds himself in a claymation world where the Milano is flying into the sun, threatening to melt him. Meanwhile, Groot and Drax must fight Ronan in a Golden Age world.

“Marvel’s Guardians of the Galaxy: Mission Breakout!” stars Will Friedle as Peter Quill/Star-Lord, Trevor Devall as Rocket Raccoon, Vanessa Marshall as Gamora, David Sobolov as Drax the Destroyer and Kevin Michael Richardson as Groot. The show is produced by Marvel Animation.

What do you think of the different styles of animation? Let us know your thoughts in the comments below.

Comments Off on Distinct Animation Styles Featured in ‘Marvel’s Guardians of the Galaxy: Mission Breakout!’