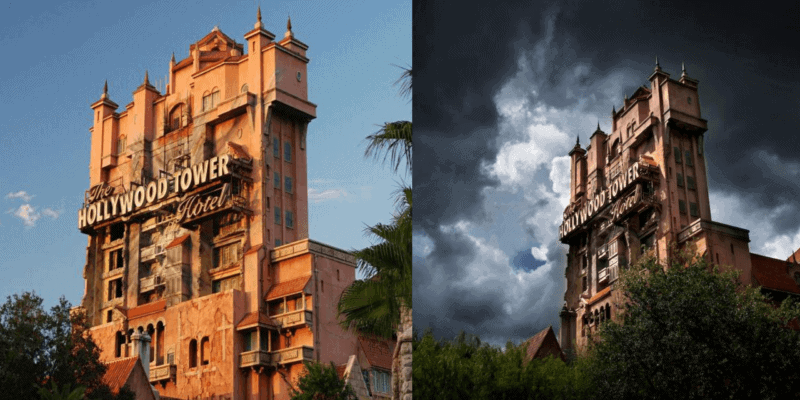 The Tower of Terror is already considered to be one of the best (and spookiest) attractions at Walt Disney World, and Kent Phillips, a photographer for Disney, has just shared the perfect shot of the attraction as part of the #DisneyMagicMoments campaign that they have been doing over on the Disney Parks Blog.

Related: Tower of Terror gets a LEGO makeover

See it in all its glory below:

While we all have photos of the Tower of Terror on a cloudy day, we think you will agree that nothing quite meets these standards. Below Kent talks about his idea for the shot and how it was an almost impossible moment to capture:

“It’s hard to make something look creepy on a sunny day, so the natural inclination is to wait for a cloudy afternoon, right? The trouble is, normally on a cloudy day the dark hue of the tower wouldn’t contrast enough against the sky. I basically needed the impossible: a bright, sunlit tower and a dark, creepy sky.”

If you thought the conditions were hard enough to get right, Kent actually traveled to Disney’s Hollywood Studios over six times in the space of three weeks in the hope of getting the perfect photo. Here’s his experience:

“More than half a dozen times over three weeks I drove to Disney’s Hollywood Studios when conditions looked promising, only to have the clouds shade the tower, break up and disappear, or pour buckets of water on my head, instead. Finally, the heavens took pity on me and all my necessary conditions lined up, with dramatic clouds behind a beautiful sunlit tower.”

Here are some of our other favorite #DisneyMagicMoments that have occurred over the last few months:

If you’re looking to take a trip into the Twilight Zone soon then be sure to chat with our friends at Academy Travel. No matter what your Disney Parks needs. the team will be able to help you to book your next magical vacation. Contact their team now for a free quote!

What do you think of this incredible photo of the Tower of Terror? Let us know in the comments below!