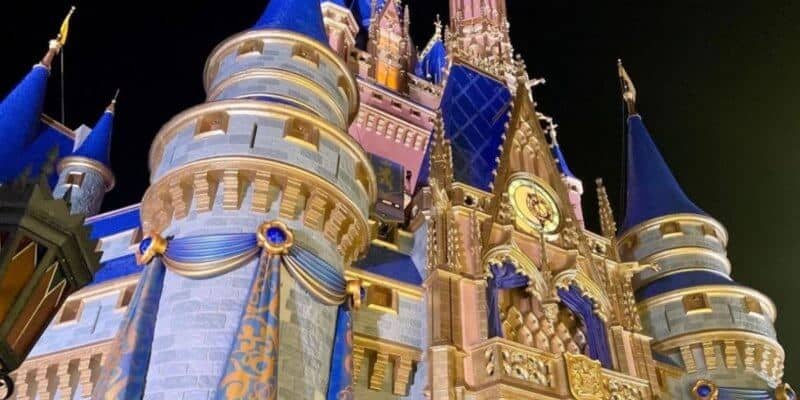 For Walt Disney World’s 50th anniversary, the Disney Parks are not holding back — Including giving Cinderella Castle at Magic Kingdom a stunning royal treatment!

And for the special anniversary, Cinderella Castle is getting a royal treatment — Complete with dramatic draperies and new paint. Now, the Magic Kingdom centerpiece has hit a milestone for the 50th anniversary, but there is more to come!

Disney Imagineer, Zach Riddley, took to Instagram to share that last night, the final 50th anniversary dramatic draperies were installed on Cinderella Castle in Magic Kingdom and that in the coming weeks, there is more to come including “majestic swirls of golden ribbons”:

Last night, our @WaltDisneyImagineering and @WaltDisneyWorld teams installed the final dramatic draperies of the 50th anniversary decor on Cinderella Castle. Over the coming weeks, the team will begin to focus on crowning the castle roofs with majestic swirls of golden ribbons as we continue this royal treatment for “The World’s Most Magical Celebration” starting Oct. 1, 2021.

Stay tuned to Inside the Magic as we get more information surrounding Cinderella Castle and Walt Disney World’s 50th anniversary.

Additionally, Walt Disney World confirmed that a brand new look is coming to the theme parks, which Disney is calling “EARidescence“! Beautiful shades of pinks, purples, and blues will completely take over the character costumes as well as the theme park icons for the 50th anniversary celebration.

We are looking forward to even more news being released in the coming months, as we hope to find out that other surprises are in store for each of the four Disney World theme parks to commemorate this 50-year milestone.

Are you planning to visit Disney World for the 50th anniversary? Let us know in the comments below.

Comments Off on Cinderella Castle Hits 50th Milestone, But There’s More to Come!