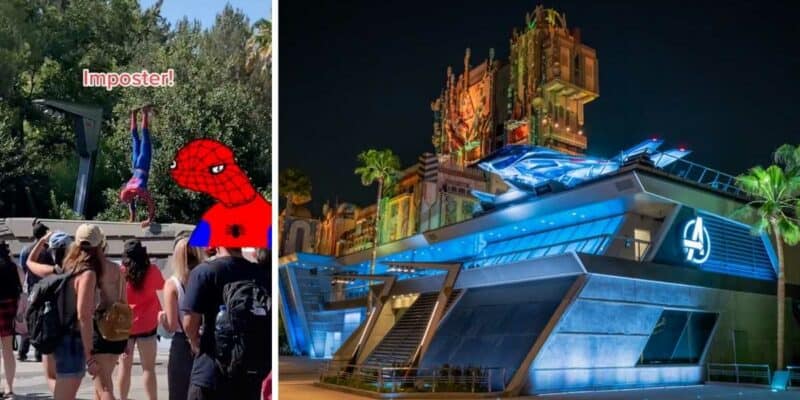 With Loki having wrapped last month and Marvel’s What If…? just launched, there is an abundance of Multiverse and Variant content currently coming out of Kevin Feige’s Marvel Cinematic Universe.

While many fans may think these interruptions along the Sacred Timeline are restricted to their screens, some Disneyland Guests could have almost been the victims of a TVA pruning this week. One reckless Guest decided to dress up and perform at Avengers Campus while the real Spider-Man was standing right THERE!

The Avengers Campus at Disney California Adventure in the Disneyland Resort allows Guests to experience the superhero antics of the Earth’s Mightiest Heroes. With two thrilling rides — WEB SLINGERS: A Spider-Man Adventure, and Guardians of the Galaxy — Mission: BREAKOUT! — the latest addition to the Anaheim theme park brings the world of the Avengers up close and personal.

Along with the rides, Disneyland Guests can encounter characters such as Black Panther, Black Widow, Ant-Man, Doctor Strange, and Spider-Man across two mesmerizing locations — Avengers Headquarters and the Ancient Sanctum.

Disney hasn’t taken any shortcuts with its MCU theme park expansion, so much so that Guests can actually see Spider-Man fly through the air during an unparalleled attraction combining a real-life actor and a startlingly dynamic animatronic. The acrobatic display enthralled Guests visiting Avengers Campus at Disney California Adventure on opening day.

Disneyland, along with the rest of the Disney Park empire, aims to deliver a unique, experience-driven vacation for all its Guests, meaning that there are rules that must be followed to allow for a safe visit to the Parks. That being said, one Guest seemingly wanted to challenge Disneyland’s restrictions and bring the Multiverse to our world.

A recent TikTok captured the moment that Avengers Campus had two Spider-Mans (and no, it wasn’t Tobey Maguire and Andrew Garfield). The video from @Pudgy_Stitch shows one Spider-Man performing acrobatic skills while a crowd of Guests looks on, all the while another Spider-Man — the official Disney character — is having photos with Guests.

The imposter Avenger — confirmed by his Sam Raimi-style Spider-Man costume — then runs through the crowd before Cast Members and security seem to pick him up AFTER he changes back into ordinary clothes. The video shows the Guest in regular attire with his Spider-Man costume still covering his feet. Someone call Kang.

♬ how would they know bad girls club – Chris Gleason

All jokes aside, while it may seem harmless and hilarious for Guests to act this way, Disneyland has strict policies in place when it comes to costumed Guests and expected behavior within the Park. Per the official Disneyland Dress Code:

However, there are some exemptions when it comes to dressing up at Disney Parks. Usually, when special events such as Oogie Boogie Bash — A Disney Halloween Party, take place, Disney will allow Guests over the age of 14 to wear a costume. The rules for events like these include:

All Guests may dress as their favorite character, but may not pose for pictures or sign autographs for other Guests.

Costumes must be family-friendly and may not be obstructive, offensive, objectionable or violent.

Please check here for more costume guidelines if you are attending Oogie Boogie Bash — A Disney Halloween Party this year.

The penalties for wearing a costume while on Disney theme park property can be quite severe. While Disney doesn’t explicitly state bannable offenses, the Disneyland website does outline its Park Rules and Regulations clearly.

Under Prohibited Activities, the Disneyland website states the following:

Engaging with other Guests or impeding operations while posing as or portraying any character in costume.

Not much is known regarding the Spider-Man Variant that visited Disneyland Resort yesterday but comments on the video report that the Guest was picked up by security outside The Collector’s Warehouse before being kicked out of the Park. Disney has not confirmed if the Guest was removed at this time.

Have you ever witnessed any strange goings-on at a Disney Park? Let us know in the comments below!