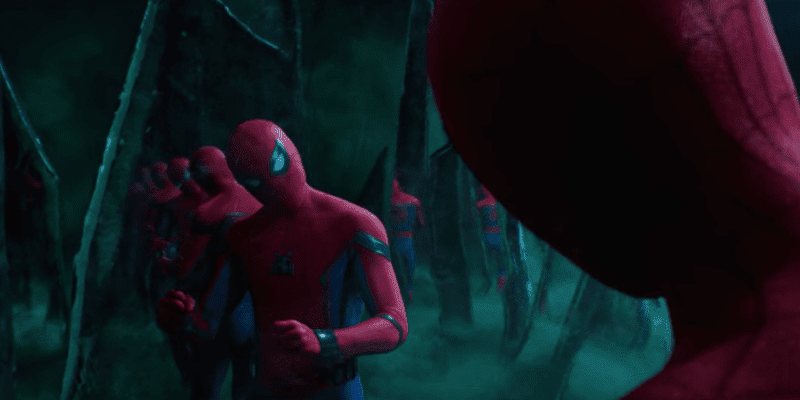 With the world of Kevin Feige’s Marvel Cinematic Universe gaining steam once again after a year of delays, one upcoming Marvel project is perhaps the most anticipated of the year due to the immense secrecy surrounding it despite no trailer yet released. Director Jon Watts’s third installment in his Spider-Man franchise — Spider-Man: No Way Home (2021) — hits theaters at the end of the year following on from his previous films, Spider-Man: Homecoming (2017), and Spider-Man: Far From Home (2019).
Here are the rumors swirling about the upcoming sequel.

What information is available about Spider-Man: No Way Home?

At this moment in time, not a lot is known about No Way Home. The third installment in Sony’s and Marvel Studio’s Spider-Man franchise has been pretty close-guarded — that’s not to mention the saturation of rumors swirling around, however.

We know that some of the original cast members are returning like Tom Holland in the title role and Zendaya as MJ, but as far as the plot goes, Marvel has remained tight-lipped — although many signs point to the Multiverse being involved somehow. As well as the confirmed title, we also know the new Marvel movie will land in theaters in December 2021.

What are the sources of the Spider-Man: No Way Home leaks?

Many of the Spider-Man: No Way Home leaks come from those attached to the project, fan theories and merchandise like LEGO and Funko. When it comes to the actors themselves, Alfred Molina accidentally revealed how his character, the infamous Doc Ock AKA Doctor Octopus, would come back into the Marvel Universe following his “death” in Sam Raimi’s Spider-Man 2 (2004). Molina’s comments even sparked Marvel Studios President Kevin Feige to jokingly throw shade at the actor.

On the other side of things, Marvel fans themselves seem to be stirring up their own ideas. A thread on Reddit — which was written by an alleged Marvel “insider” — details the series of events that will reportedly take place in the Spider-Man sequel. Although it must be noted that neither Marvel Studios nor Sony have released any plot information thus far.

How is Spider-Man: No Way Home expected to incorporate the Marvel Multiverse?

The Multiverse is expected to appear based on the rumors that two other Spider-Man incarnations are set to turn up, as well as Benedict Cumberbatch’s Doctor Strange appearance as the Sorcerer Supreme that has been confirmed. As we know, the New York sorcerer is returning for his own sequel just three months after Spider-Man: No Way Home‘s release — aptly, titled Doctor Strange in the Multiverse of Madness (2022).

The casting rumors along with Strange’s appearance have given the Spidey Multiverse theory some weight. When teamed up with the game-changing finale of Loki on Disney+, it is easy to see how the Multiverse is likely to not only impact Spider-Man: No Way Home, but the rest of the MCU’s projects moving forward.

What are the biggest casting rumors about Spider-Man: No Way Home?

Aside from the returning MCU Spider-Man cast, the biggest rumors still surround the potential appearance of previous, older versions of Spider-Man with actors Tobey Maguire (Spider-Man) and Andrew Garfield (The Amazing Spider-Man) allegedly set to return.

In addition to Maguire and Garfield, Willem Dafoe‘s villain Norman Osborn AKA Green Goblin is rumored to star in the upcoming movie based on Dafoe himself alluding to a highly secretive project he has been part of in a recent interview. And, finally love interests to both previous Peter Parker‘s — Mary-Jane Watson and Gwen Stacy — are rumored to appear, played by Kirsten Dunst and Emma Stone, respectively.

Why are Tobey Maguire and Andrew Garfield expected to appear in Spider-Man: No Way Home?

Maguire’s and Garfield’s Peter Parker‘s have been rumored all year, ever since Collider reported that Garfield would be returning to his role as Spider-Man in Spider-Man: No Way Home. Industry “insiders” also commented that Maguire would be back, and when Feige announced that Doctor Strange would feature that was the spark that ignited the rumor mill for the continuation and craziness of the Spider-Man franchise.

Although more recently, Garfield himself has said that he is definitely not returning with Holland also speaking out on the rumors, saying they are definitely not in the film. That being said, we know no matter what the actors say, Marvel fans will be holding out for that famous Spider-Man meme to play out on the big screen.

What actors will not be returning in Spider-Man: No Way Home?

As of right now, we don’t know much about the overall casting situation over in the Spider-Man camp. As well as Holland and Zendaya, we also know that Jacob Batalon is back as Ned Leeds, as is Marisa Tomei as May Parker, and JB Smoove as Julius Dell.

While Jon Favreau’s Happy Hogan is likely to appear, this has not yet been confirmed.

How is Spider-Man: No Way Home expected to involve multiple versions of Spider-Man?

According to the “insider” report and numerous fan theories, the multiple versions of Spider-Man are meant to appear in the following way. Marvel fans believe that Doctor Strange will show up in order to get Peter’s help in managing the breaking of the Multiverse. Two things make sense here — both Peter Parker and Stephen Strange live in New York, and Doctor Strange is likely to take on the mentor role that the late Tony Stark (Robert Downey Jr.) left vacant, showcasing Holland’s Spider-Man evolution into becoming a more confident hero.

When you add this theory to the climactic finale to Michael Waldron’s Loki, then the Multiverse is pretty set to be included in some way. The Spider-Man theory alludes to Holland’s Spider-Man seeking out his other incarnations — in this case, Maguire’s and Garfield’s — to help battle the villain characters that are crossing over from each Marvel Universe. We already know Molina’s Doctor Octopus and Jamie Foxx’s Max Dillon AKA Electro will appear in the film.

What information are the most popular fan theories about Spider-Man: No Way Home based on?

The most popular fan theories are based on a few things:

The casting of Cumberbatch, and Sony’s Molina and Foxx. When looking through the lens of the Multiverse in the Marvel Cinematic Universe, it is almost guaranteed that is how the villains will return especially when we know the Doctor Strange sequel is directly related to the Multiverse.

Molina revealed that his appearance is likely to be via de-aging CGI technology which suggests that Doctor Octopus will exist in Spider-Man: No Way Home as he did in Spider-Man 2. This in turn poses the idea that the events of these films are happening concurrently.

Also, Charlie Cox’s character Matt Murdock AKA Daredevil is expected to appear after having been confirmed as on the set of Spider-Man: No Way Home. Although in what capacity the character will feature, or if at all, is still to be revealed. Some think that Cox will be introduced as the lawyer for Peter Parker following his framing by Mysterio (Jake Gyllenhaal). Most recently, Cox had to cancel convention plans due to “last-minute filming schedule changes” that have added fuel to the Spider-Man fire, as the film is reportedly in its reshooting phase.

What are the biggest potential spoilers for Spider-Man: No Way Home?

The biggest potential spoilers for the upcoming Marvel movie are definitely rooted in the casting of these characters. Whether they believe the rumors or not, fans are likely to be desperate to see multiple versions of big-screen Marvel Comics hero that Stan Lee and Steve Ditko made famous.

How much did the Covid-19 pandemic delay the release of Spider-Man: No Way Home?

Spider-Man: No Way Home was originally scheduled to be released on July 16, 2021, before being pushed back to November 5, 2021, due to the effects of the pandemic. Even with such a delay Marvel fans are still anxiously anticipating the official trailer — the official Twitter account has continued to tease trailer content for a while now.

When will Spider-Man: No Way Home be released in US theaters?

When will Spider-Man: No Way Home be released on demand?

It is not yet known when Spider-Man: No Way Home will be released on demand by either Sony or Marvel. This will most likely be dependent on the current effects of the COVID-19 pandemic toward the end of the year. That being said, as Black Widow scores huge Disney+ opening numbers, it may be that movie studios bring their big blockbusters to small-screen streaming audiences sooner rather than later.

No matter what happens in the next installment of the Spider-Man franchise, it is sure to be a big hit.

Are you excited for Spider-Man: No Way Home? Let us know in the comments!

Comments Off on All the Rumors About ‘Spider-Man: No Way Home’