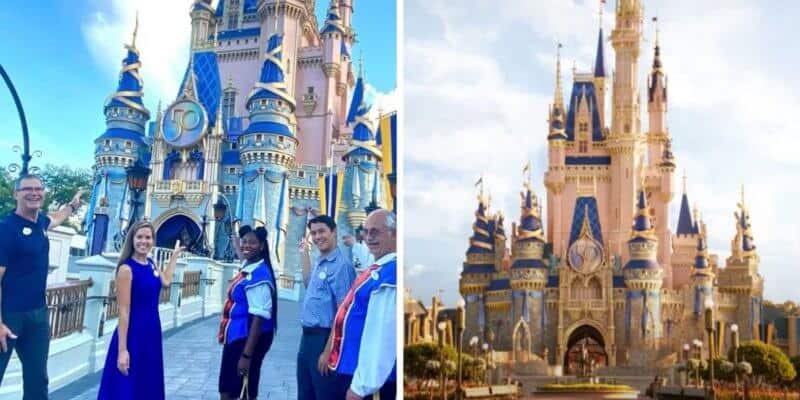 And for the special anniversary, Cinderella Castle is getting a royal treatment — complete with dramatic draperies and new paint. And overnight, Cinderella Castle received the iconic 50th crest that we have seen in the concept art and renderings (below)!

Jeff Vahle, the President of Walt Disney World Resort, took to Instagram to share a photo of the newly installed 50th crest along with the caption:

Just when you thought our castle couldn’t get any more stunning … Check out the golden 50th crest that was added last night! I happened to be in Magic Kingdom this morning and couldn’t resist getting a photo of it with some of our Cast Members.

The WDW Ambassador Instagram page also shared photos of the new 50th crest, along with the caption:

Overnight, the much-anticipated golden 50th crest was added to Cinderella Castle, completing the royal makeover as we ramp up to The World’s Most Magical Celebration beginning October 1. We took in her shimmering beauty with fellow Cast Members this morning as the sun rose over Magic Kingdom Park! It was absolutely dazzling ✨ #DisneyWorld50

We love seeing more additions being installed onto Cinderella Castle ahead of the 50th anniversary and cannot see what else will be coming to the theme parks for this big milestone! Stay tuned to Inside the Magic for all the 50th news and updates.

We are looking forward to even more news being released in the coming months, as we hope to find out that other surprises are in store for each of the four Disney World theme parks to commemorate this 50-year milestone.

Are you planning to visit Disney World for the 50th anniversary? Let us know in the comments below.