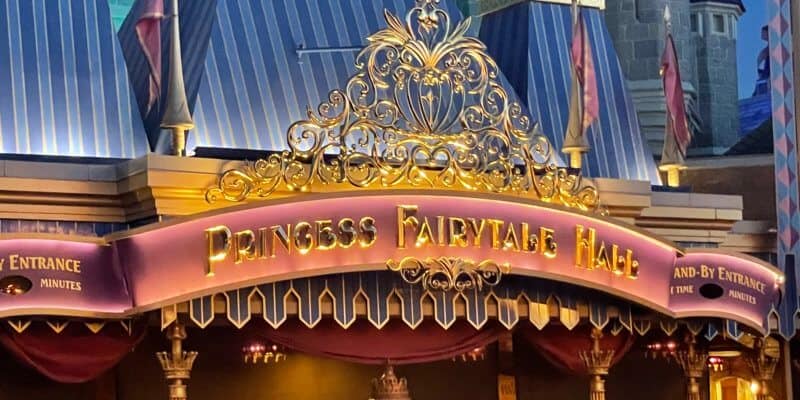 Now that Disney World’s 50th anniversary is a few months away, Guests are really able to see the theme parks transform into their new EARedescent color scheme.

So far, Magic Kingdom has seen the most change with Cinderella Castle completely transformed, and now, Fantasyland is joining in on the festivities. The land carries out the regal blue, pink, and gold colors throughout, and some areas have seen major makeovers.

With a closer look, Guests can take a look at the difference that a new 14-karat gold sign can make!

One of the most interesting things is that we have now seen this location transform for the 50th anniversary; however, meet and greets are yet to be reintroduced into the Disney World parks. At the moment, Guests can have character interactions, which we have seen pop up on the exterior of Princess Fairytale Hall in the past, but no one has entered the building since before the pandemic.

Theoretically, it would not make sense to update the facade if Disney did not integrate the meet and greet location back into Magic Kingdom operations during the 50th anniversary. Although Disney has yet to announce any return of meet and greets at the location or theme parks, we do know that Disney World is taking steps to ensure that their Cast Members are all fully vaccinated, which could be a big step in terms of safely allowing meet and greets to return.

Stay tuned to Inside the Magic for all of your up-to-date Disney World news regarding the anniversary and any operational changes that will help bring the Park back to normal.

Do you think that Disney World will bring back meet and greets for the 50th anniversary celebrations?