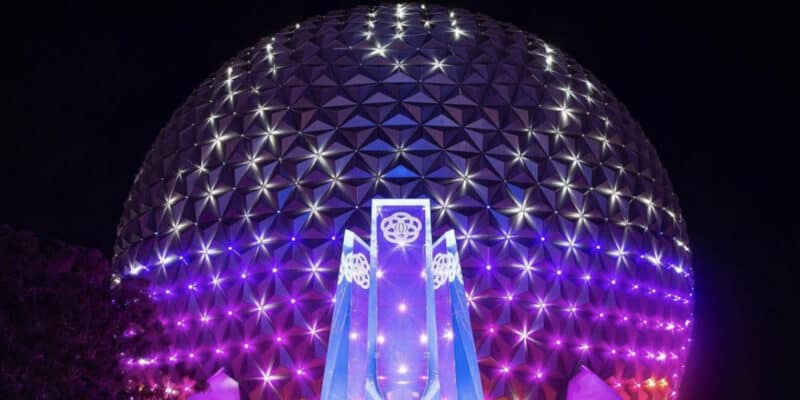 Spaceship Earth is getting a magical new makeover! The iconic centerpiece of the EPCOT theme park at Walt Disney World in Florida will soon be glimmering with lights as part of Walt Disney World Resort’s 50th anniversary celebration. Now, one Disney Imagineer has shared a special look at the lighting that will soon be unveiled on this popular attraction.

Here’s what Imagineer Zach Riddley had to share this morning:

We are only a few weeks away from our stunning reveal of our new Spaceship Earth lighting as part of the Walt Disney World 50th Anniversary celebration. As I shared recently, our Imagineers are working behind the scenes to finalize the programming of this experience.

The artistry is inspired by the voice of Spaceship Earth:

“Like a grand and miraculous spaceship, our planet has sailed through the universe of time …

… While no one knows for sure what we’ll see or do, I do know it will be quite an adventure—an adventure that we’ll take and make together. See you in the future!”

This first-look image actually gives you a glimpse into the near future when the night will come alive in an entirely new way with this Beacon of Magic. Inspired by past and future, the classic Spaceship Earth color gradients will be rendered richer by our new lighting fixtures, evoking twinkling starlight in an evening sky.

This is visual poetry and will forever change the way we experience EPCOT.

I can’t wait for everyone to see when this experience officially launches on October 1st!

See you in the (near) future!!

The new lighting on Spaceship Earth is just one of the many magical elements coming soon to the Disney theme parks as part of The World’s Most Magical Celebration. Disney shared more information about the Beacons of Light in a previous blog post:

The castle will add even more magic at night, joined by icons at each of the other three theme parks as they transform into Beacons of Magic. In the video above, you can get a feel for what they’ll look like, with pixie dust on Cinderella Castle, magical fireflies inhabiting the Tree of Life at Disney’s Animal Kingdom Theme Park, and special new touches coming to life on the Hollywood Tower Hotel at Disney’s Hollywood Studios.

Read More Magic: Club Cool Is BACK Open at EPCOT!

We can’t wait to see all four theme park icons — Cinderella Castle, The Hollywood Tower of Terror, The Tree of Life, and Spaceship Earth — magically transform at night as part of the 50th anniversary of Walt Disney World. If you want to visit too, click here to book a trip!

What do you think of the new lighting on Spaceship Earth? Let us know in the comments!