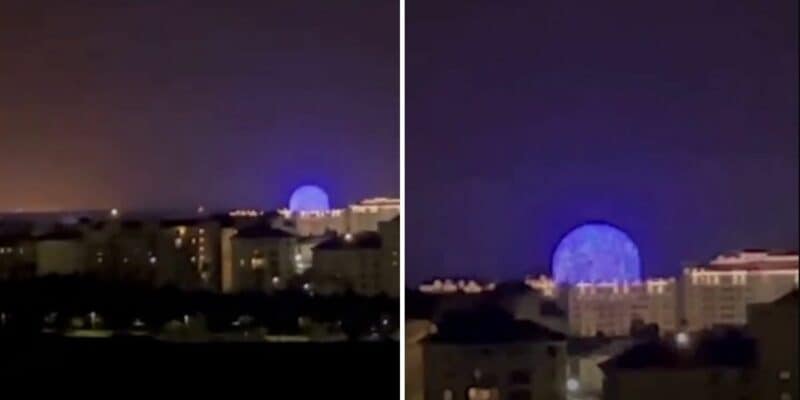 With the 50th anniversary at Walt Disney World Resort only a few weeks away, many fans are very excited to see all of the changes and new offerings that will be coming to the Park.

When the theme park icons were announced, we knew Magic Kingdom would decorate Cinderella Castle, Disney’s Hollywood Studios would give the Tower of Terror some shimmer, Disney’s Animal Kingdom would project onto the Tree of Life, and Spaceship Earth over in EPCOT would receive a permanent change as points of light would be added to the ball so that it would shine outward.

Now that the Beacons of Light are nearly ready to debut, Disney is undergoing testing to ensure that the ball can sparkle correctly for that first night. MagicbandManian (@MagicbandManic) took to Twitter to post a video retrieved by another Guest showing the testing of the Beacons of Light on Spaceship Earth. Up until now, we have seen the lights on in a close-up shot, but the far away flickering picture we can see below is even more stunning than up close!

Someone posted a video on the AP page of Spaceship Earth testing all its points of light.

Someone posted a video on the AP page of Spaceship Earth testing all its points of light. pic.twitter.com/X1pN6Zkwdn

As you can see, Spaceship Earth’s glimmer can be seen very easily now, especially in comparison to what was projected on it before, which was just a few different light colors. On October 1, Guests will finally get to see the final result of the new lighting, which can change from the video above since Disney has not yet debuted it yet. Those visiting EPCOT that day will also see the debut of the nighttime spectacular Harmonious, as well as get to ride the new attraction Remy’s Ratatouille Adventure, all while enjoying the International Food and Wine Festival!

What do you think of the Beacons of Light on Spaceship Earth? Let us know in the comments below.