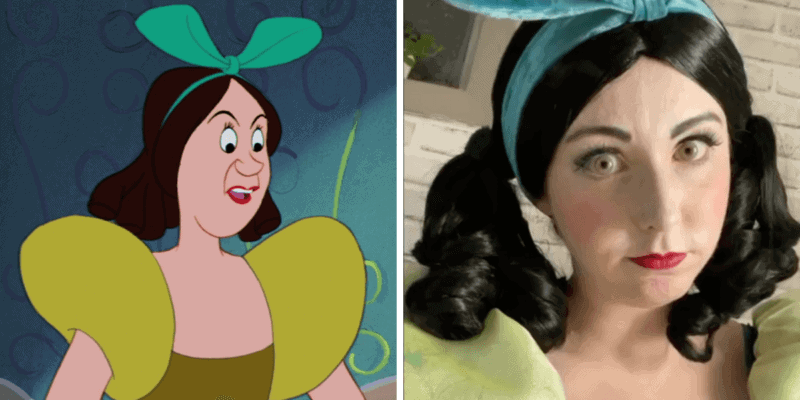 One thing that makes Disney theme parks truly magical places is the interactions with the characters that Guests have come to know and love. Being able to see someone like Mickey Mouse, or maybe your favorite princess, in person just adds to the immersive aspect of the Parks. Cast Members truly embrace the entire being of the character they are playing, which can sometimes have unforeseen reactions.

One such reaction happened to TikTok user magicalgirlmelanie, who used to play Drizella at Cinderella’s Happily Ever After Dinner — a character dining experience held at 1900 Park Fare at Disney’s Grand Floridian Resort & Spa. Guests attending this dining experience (which is currently unavailable) are able to experience a delicious buffet as characters from the 1950 film, including Cinderella, Prince Charming, Lady Tremaine (Cinderella’s wicked stepmother), and stepsisters Anastasia and Drizella, walk around to all the tables and greet them.

It was during one of these dinner buffets that magicalgirlmelanie says that she walked up to a table to interact with a man and woman and their two adult children. For Guests who would like characters to sign their autograph books, they are asked to leave the books at the end of the table to make it easier. Melanie says that she noticed that the table had a second book at the other end of the table. She asked about it and was told that it was for Princesses only.

Well, Drizella is not one to let herself be overshadowed by princesses, so Melanie acted accordingly. According to her, she made a scene about the book, then slowly took it and ended up signing a blank page. She notes that the page was in the middle where there were no other signatures and that she also noticed Aladdin’s signature and made a point about him not being a princess.

Drizella signed the autograph book, moved on, and thought that was that. Unfortunately, she later saw the woman on the verge of tears and was told by her manager that her playing her role had caused the woman to cry.

Reactions to Melanie’s video were mainly positive, with many praising the woman for doing her best to play the role that she was given. However, there were some who maybe felt that Melanie should have picked up on the fact that the woman was serious about the book.

You can watch Melanie’s full story by watching it below or clicking here and visiting her TikTok page — where she also dresses up as Anastasia and Cinderella.

I made a Disney adult cry. #excastmember #facecharacter #drizella #cosplay

1900 Park Fare is also home to the Supercalifragilistic Breakfast where Guests will have the opportunity to see characters like Mary Poppins and Bert, Winnie the Pooh and Tigger, and the Mad Hatter and Alice. It should be noted that character dining has been suspended at this time, so heading to the theme parks is your best chance to see the characters you love.

What do you think about Melanie’s story? Do you think she played her character just right? Let us know in the comments!

CLICK HERE to book your magical Disney vacation with our friends at Academy Travel – an EarMarked Diamond travel agency that can provide you with a free quote today!