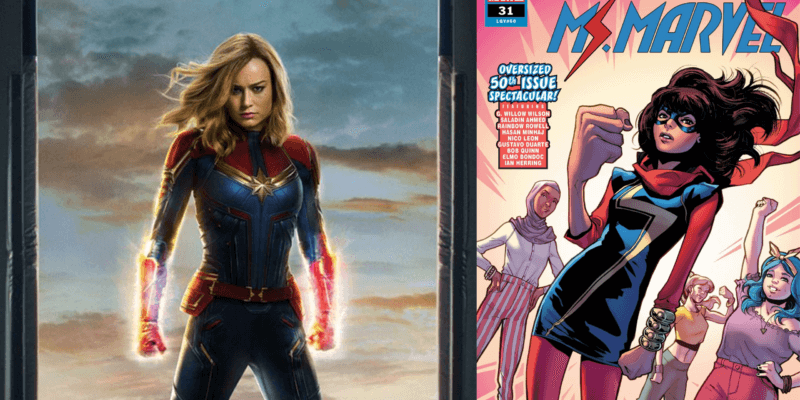 Can you believe that Captain Marvel was released last year? It feels like years ago! Things are starting to slowly move ahead on the much-anticipated sequel and we have a huge new rumor that has come from a source within the industry.

The big rumor is that the second Captain Marvel film is set to include Ms. Marvel. Disney is already working on Ms. Marvel Disney+ show and we know that they want to intertwine all of the shows on Disney+ with the main MCU movies, adding Ms. Marvel to Captain Marvel 2 does make the most amount of sense given the relationship that they have in the comics.

In Marvel Comics, Captain Marvel becomes the mentor of Ms. Marvel on several occasions and she ends up joining The Avengers — Are you starting to see how this could easily work in the MCU?

Related: Has Disney found the actor to play Ms. Marvel?

In addition to seeing Ms. Marvel in the sequel, the movie is also set to become a “mini-Avengers” movie that includes a selection of other heroes both past and present from the MCU. Think about it a bit! It could follow the same type of set up like Captain America: Civil War and The Winter Soldier.

Captain Marvel is set to become one of (if not the biggest) superhero of the next phase of Marvel movies. Given that the future looks like the movies will be following the Secret Invasion storyline, we are going to see a lot more of the Skrulls and them replacing some of our favorite heroes and villains during the course of the next few years. It makes sense to include a number of different heroes from previous films, especially if we find out that Skrulls have been masquerading as some of them for years!

Related: Why Brie Larson is fantastic in the role of Captain Marvel

We can’t wait to see more of Brie Larson in the MCU and look forward to what she brings to Captain Marvel 2 and the future of the MCU!

What do you think about other Avengers being included in Captain Marvel 2? Let us know in the comments below!

Comments Off on ‘Captain Marvel 2’ Set to Be a Mini-Avengers Movie!