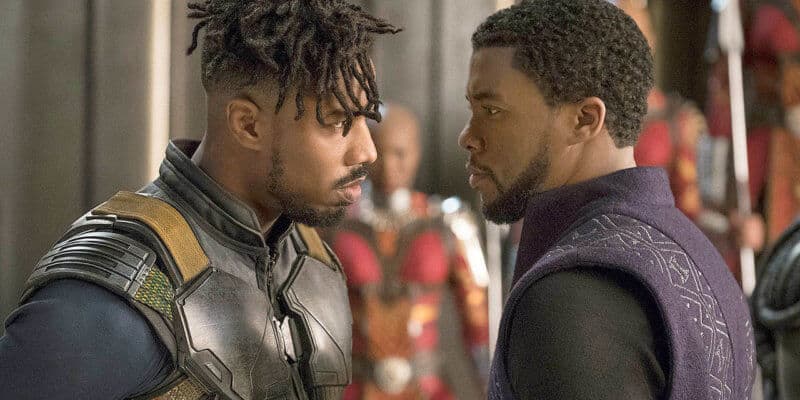 The Marvel actors have more than just on-screen relationships — They are all a close-knit family in real-life as well. And when the star of MCU’s Black Panther, Chadwick Boseman, tragically passed away last year, actors and actresses began taking to social media to share condolences, memories, and kind words about the real-life superhero.

The man who brought King T’Challa to life in Marvel’s Black Panther passed away from colon cancer on August 28, 2020, at the age of 43. The news came as a shock to so many as Boseman was secretly battling cancer for years — In fact, it has been confirmed now that the actor began battling cancer at the same time he began filming Captain America: Civil War.

Following the news of Boseman’s death, Disney and Marvel struggled with how to proceed with the already announced Marvel Cinematic Universe film, Black Panther 2.

Rumors began circulating the internet surrounding possible directions the directors, including Ryan Coolger and writers would take for the already announced Black Panther sequel, including the possibility of T’Challa being written out of Black Panther 2 before the story starts. The rumor stated that King T’Challa would apparently die off-screen and Shuri would then assume the mantle, but this has not been confirmed at this time.

However, as for actual confirmed details, during Disney Investor Day 2020, Disney confirmed they would not be recasting Boseman in director Ryan Coogler’s Black Panther 2. Unfortunately, that is the only detail the company could confirm for the Black Panther sequel as they wanted to reassure fans they would never replace Boseman or his character in the franchise.

Will Michael B. Jordan Reprise His Role in Black Panther Sequel?

And now, Michael B. Jordan himself is speaking out on the possibility of Killmonger returning in the MCU sequel.

When asked about Black Panther 2 on Good Morning America, Jordan said “I can’t say too much about that one, honestly. With the year that we’ve had, and the loss of a dear friend, they were figuring out whatever they need to do and what was best for the franchise.”

He continued, “But they’re family, so if I ever had the opportunity to get back into that franchise, I would.”

On the evening of Friday, August 28, 2020, the world lost a talented actor and real-life superhero. Chadwick Boseman, who famously brought King T’Challa to life in Marvel’s Black Panther, passed away from colon cancer. He was 43 years young.

The news came as a shock to many as they took to social media to express their condolences for the late actor. Everyone from around the world shared their love, kind words and thoughts on the passing of actor Chadwick Boseman, including The Walt Disney Company, Marvel Studios, and actors including Josh Gad, Chris Evans, Chris Pratt, Brie Larson, Zoe Saldana, Mark Ruffalo, and more.

The record-breaking Marvel film is currently streaming on Disney+. If you have yet to see the MCU movie, the official description reads:

Marvel Studios’ “Black Panther” follows T’Challa who, after the death of his father, the King of Wakanda, returns home to the isolated, technologically advanced African nation to succeed to the throne and take his rightful place as king. But when a powerful old enemy reappears, T’Challa’s mettle as king—and Black Panther—is tested when he is drawn into a formidable conflict that puts the fate of Wakanda and the entire world at risk. Faced with treachery and danger, the young king must rally his allies and release the full power of Black Panther to defeat his foes and secure the safety of his people and their way of life.

Would you like to see Michael B. Jordan return in Black Panther 2? Let us know in the comments below.

Comments Off on Michael B. Jordan Confirms He Would Return to ‘Black Panther 2’